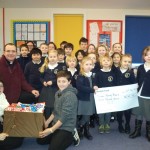 To really set off the last few days of term pupils from both Toward & Innellan Primary Schools went along to sing some carols on Friday 12th December to the residents of Dalriada Grove, Innellan (Retirement/Sheltered housing). They were well received and as always were a credit to their schools. They wore Christmas jumpers that day and made £44 for “Save the Children – Christmas Jumper Day Appeal”.

Toward Primary performed The Christmas play “Children around the World” and was well attended at Toward Church by parents, friends, families and members of the community. The children decide that they would divide any donations they received from tea/coffees between ‘Toward Church’,’ Save the Children’ and ‘ Dunoon Food Bank’. They each received a cheque for £30.

Toward Primary School also had a raffle for a food hamper kindly donated by parents. Mrs Campbell (a local resident and grandparent) won the hamper and she very generously donated it to Dunoon Food Bank. The pupils presented Rev Swift with a cheque and the hamper earlier this week. He informed the pupils that the food bank helped to support about 12/15 people in Cowal over the Christmas period. The pupils as part of being Responsible Citizens want to continue to support the food bank and we’ve agreed that the school will be a place where people can hand in donations and we’ll get them delivered to the appropriate place. So please let your friends and neighbours know and if they wish they can drop items in during the school day to either Toward or Innellan Primaries.