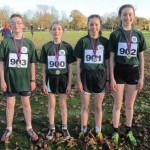 When asked what it like is to race against each other the girls shrugged and said “It’s nice to have that bit of extra support and we push each other, we are VERY competitive… We don’t think of it as racing a sister but instead just another competitor.’

Head Teacher Mr David Mitchell commented:
“Against very tough opposition, from across the country, four pupils from DGS have returned with medals. We are delighted with the success they have claimed – through their talent and determination – and as a school we wish to congratulate them and wish them well for the remainder of the season”.