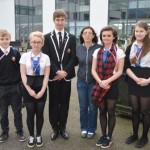 On Thursday 25th September 2014, over 700 pupils and staff of Dunoon Grammar School participated in the Karra Downie charity fun run. Pupils across the school collected sponsors, Alana Scott, Claire Black, Caitie & Sam Esler and Lee Sharp all raised the most amount of money and will be receiving a medal for their efforts.

All the money raised was collected to make an exceptional total of over £9,500.

Mr Mitchell, Head Teacher of DGS, had the idea of the fun run, he believed that it would be a fitting tribute and consulted the Downie family before pursuing the concept. Considering the circumstances the Downie family felt proud to be part of the event. All of Karra’s family took part in the run, each DGS yeargroup ran at a different time – Mrs Downie ran with 3rd year – Karra’s year and Mr Downie ran with their son Arran’s year – S6.

Claire Black, a friend of Karra commented:
“Although it was strange to be a part of, I wanted to raise as much money as possible in memory of Karra.”

Mr Mitchell, Head Teacher added:
“It was wonderful to witness so many of our pupils and staff participating in the run dedicated to Karra. It was an emotional day – but one that will be remembered by those who took part. I would like to thank the Downie family for the support they have shown to the school and we will now work with them to determine how to invest the funds raised to benefit our pupils, charity partners and to ensure a lasting legacy to Karra.”