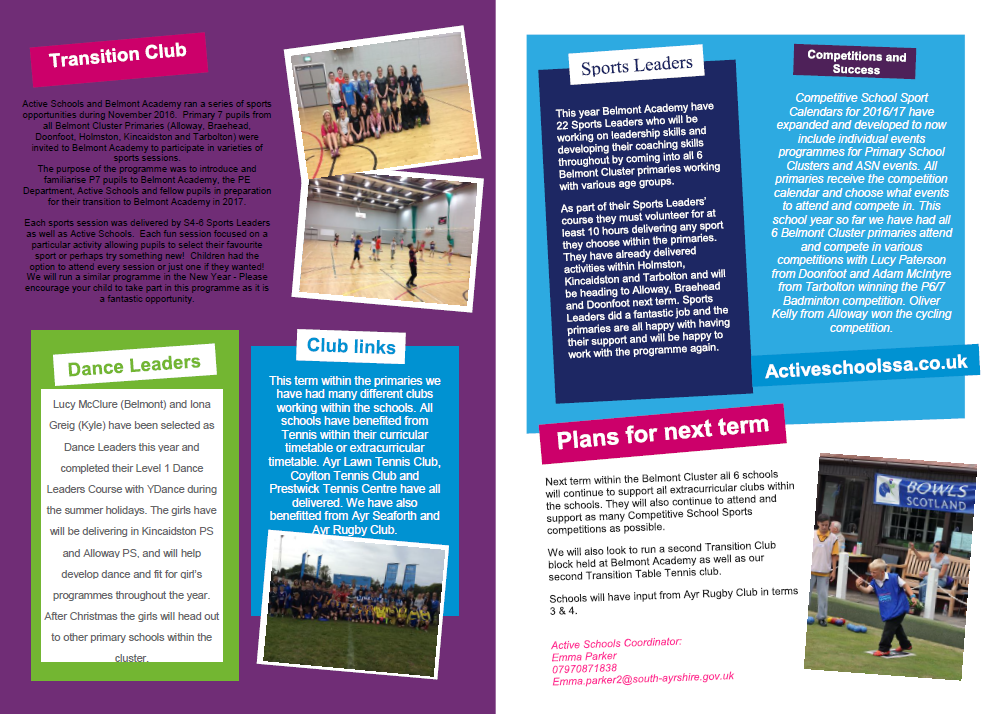 A PDF version is available on the letters page or by clicking here.

On the 14th of December pupils from Holmston Primary School went to the Belmont transition disco for all of the P7 pupils in the Belmont Cluster. It was for us to meet new people so moving on to High School isn’t as tough. It was a fun night with lots of Scottish Dancing. We did dances such as Gay Gordon’s, Canadian Barn Dance, Dashing White Sergeant, Military Two Step and many more. During half time we all got a complimentary ice lolly there was also a tuck shop. After half time we started more Scottish dances we even did some of them to Christmas songs which were much quicker. Once we had finished the Scottish dances we danced to YMCA, Macarena and had the Conga – Boys versus Girls. The Boys Won! We played the Corner Game. After that it was time to leave. All round it was a fun night.

P7 recently attended workshops led by the students at Belmont High School. They found out about physics, chemistry and biology. The most popular activities were using the Bunsen burners to make firework-like effects by burning different materials and using microscopes to examine different items including a fly’s leg!

The Primary 7s from across the Cluster enjoyed a day of Science, Technology, Engineering and Maths at Belmont High School. This gave them an opoprutnity to make new friends as well as develop their understanding of a variety of STEM skills. The balloon kebabs and marble run proved to be very popular activities.