The origins of Holmston Primary School can be traced back to the early nineteenth century when Captain John Smith ,a mariner and native of Ayr, bequeathed the sum of £2,000 to found a school for educating the children of the poor, where the master’s salary should be provided by interest earned on the money invested and where paupers’ children might be educated free.

The will of the donor was realised in 1825 in Smith’s Institution, situated in Smith Street, which apparently received its name from the town’s benefactor. In 1867 the Kyle Union Board (Kyle Union being a euphemism for Poorhouse) refused to provide a site for a new school and it was therefore determined to enlarge the old school; the pupils, during the building operations, were divided between the Poorhouse and Loudon Hall. 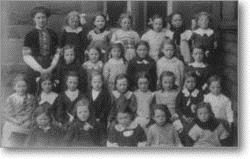 The school continued to be in Smith Street until 1883 in a building used by the Skin, Hide, Fats and Wool Co. The next year it was transferred to its present site in Holmston Road, and in 1930 its name was changed to Holmston Public School. 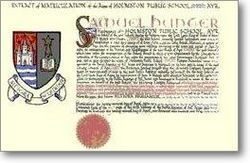 The bequest of John Smith would do little to maintain a school today, and the school has long ceased to serve the poor to any greater extent than the other schools in the town. It is good however that the original benefactor will not be forgotten – the name is commemorated in the school’s Charter for its Coat of Arms granted on the 27th April 1950. Still clearly visible, inscribed in Ballochmyle red freestone on the front of the school facing Holmston Road, are the words Smith’s Institution. Time and man permitting, John Smith may well be remembered well into the twenty first century.