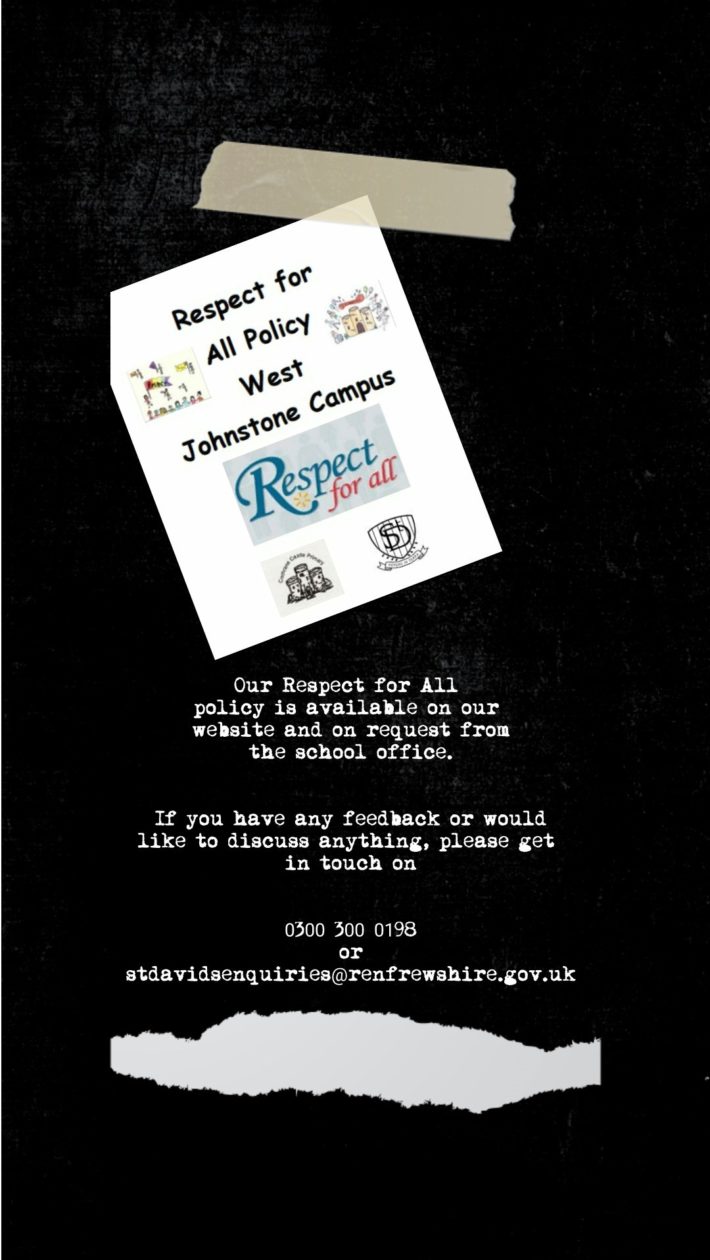 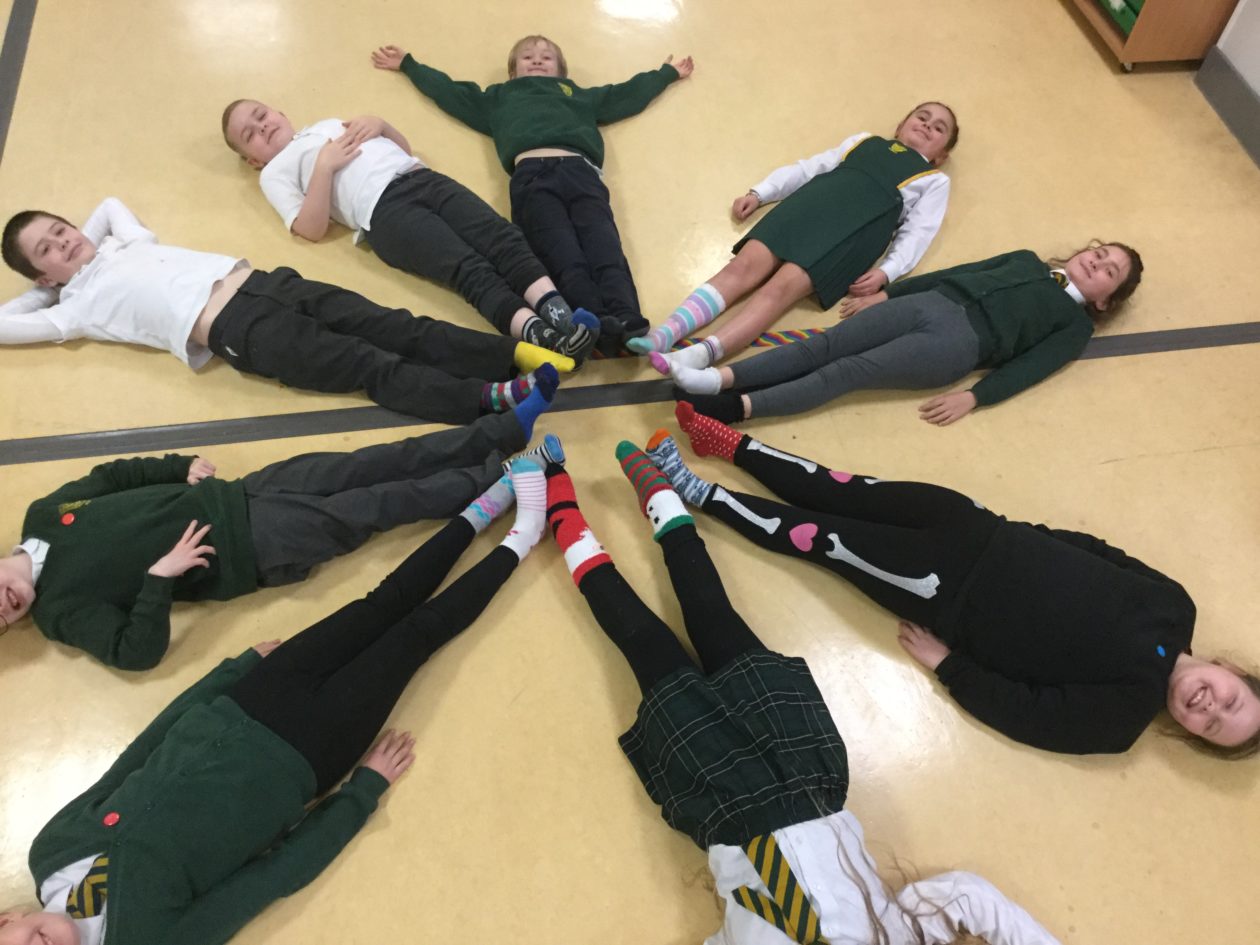 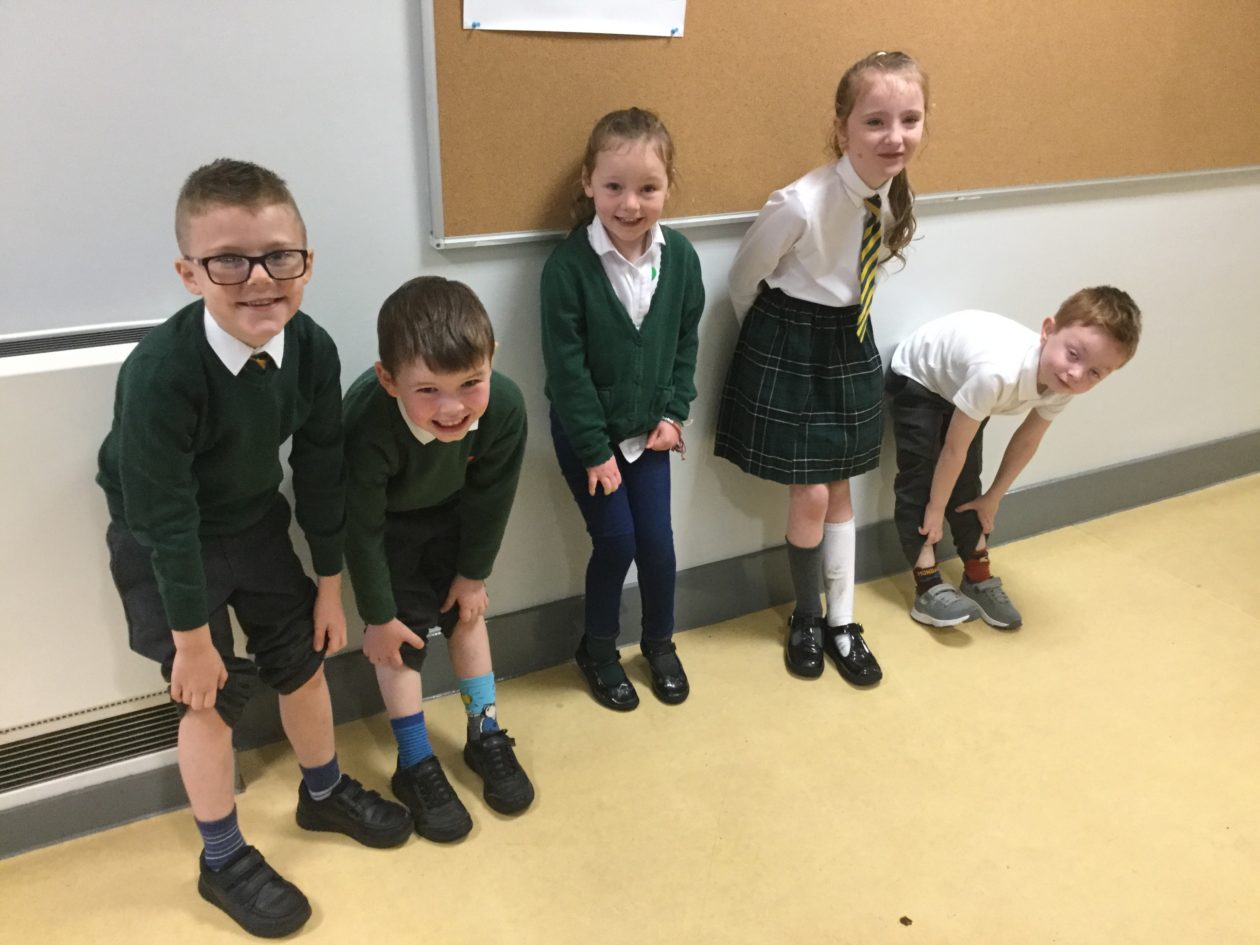 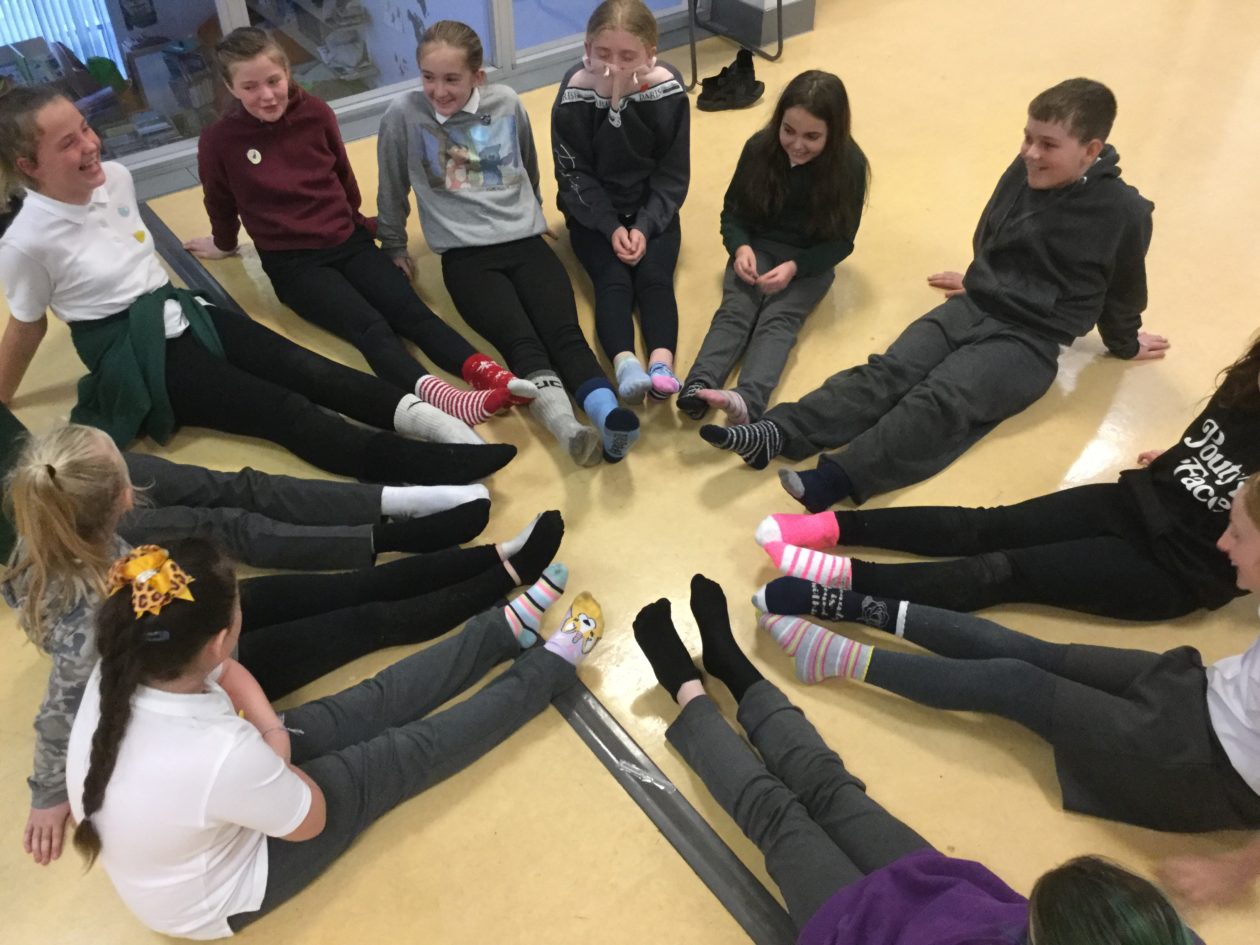 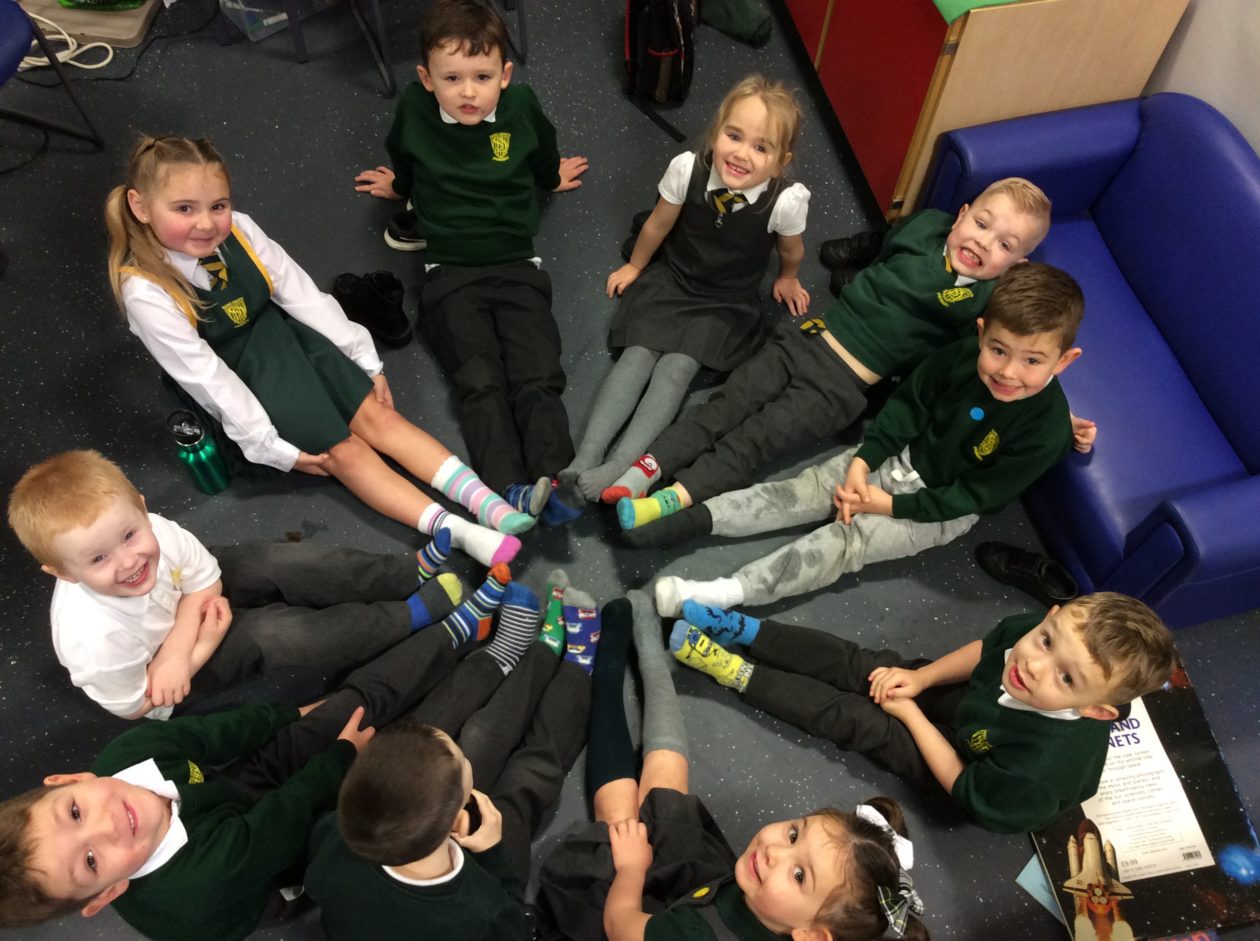 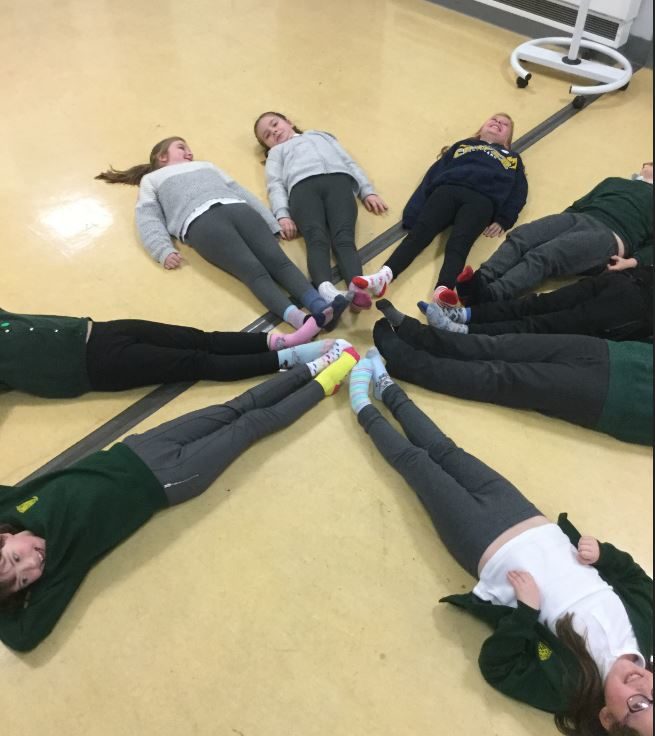 We also watched a video during our Virtual Assembly from Respect Me all about Bullying and what you can do – our pupils told us that they enjoyed the video and found it informative.

Respect me have lots of information about bullying on their website  for children, schools and families. You can find out more by clicking here. 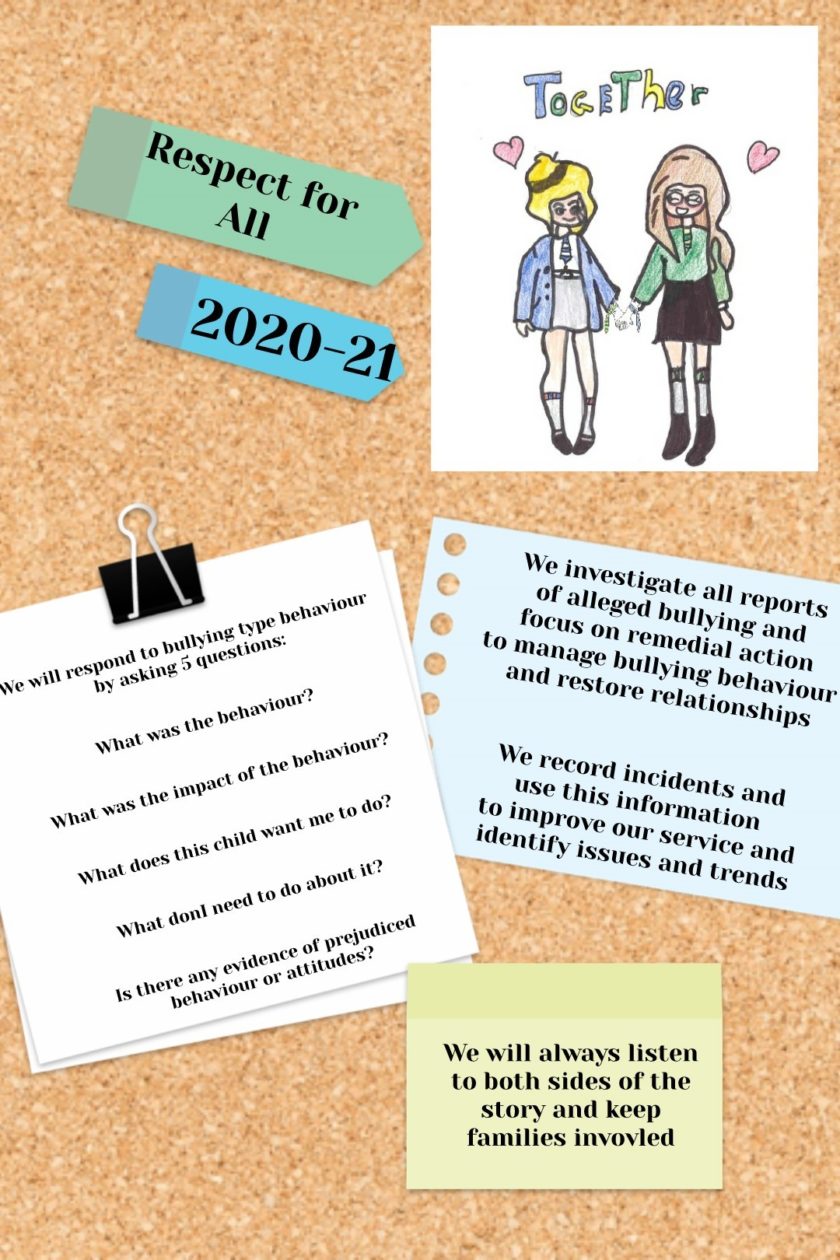 When bullying is reported to us, we will investigate and work with everyone involved to manage bullying behaviour and restore relationships.

All our staff, partners and pupils are regularly reminded to be vigilant and report anything they are concerned about.

We always listen to both sides of the story and treat everyone with respect. We rely on working closely with families to ensure we find a way forward that is suitable for everyone. 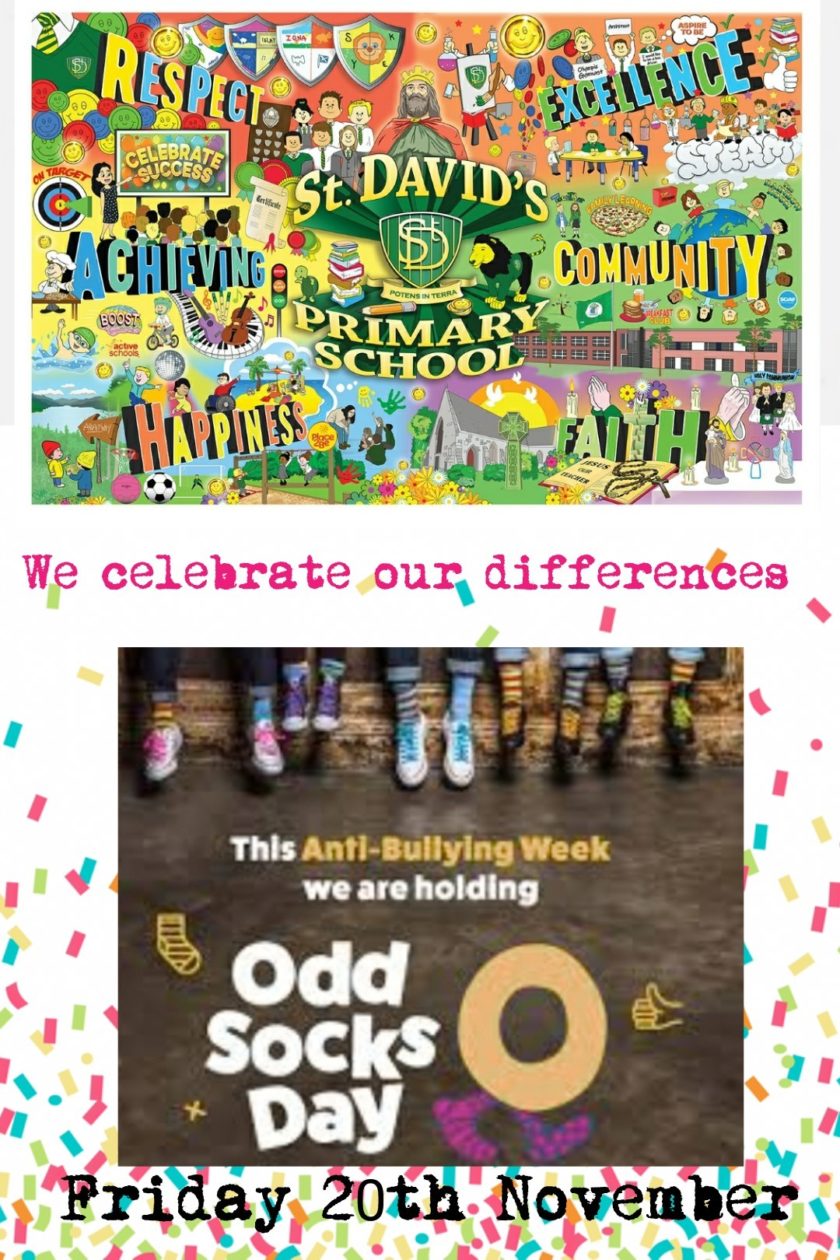 This year, Odd Socks Day is being promoted by Anti Bullying Week organisers as a way to show that our differences are what make us unique and we should celebrate them. If you would like to join in, your child is encouraged to come to school tomorrow, Friday 20th November, wearing odd socks – the sillier the better! 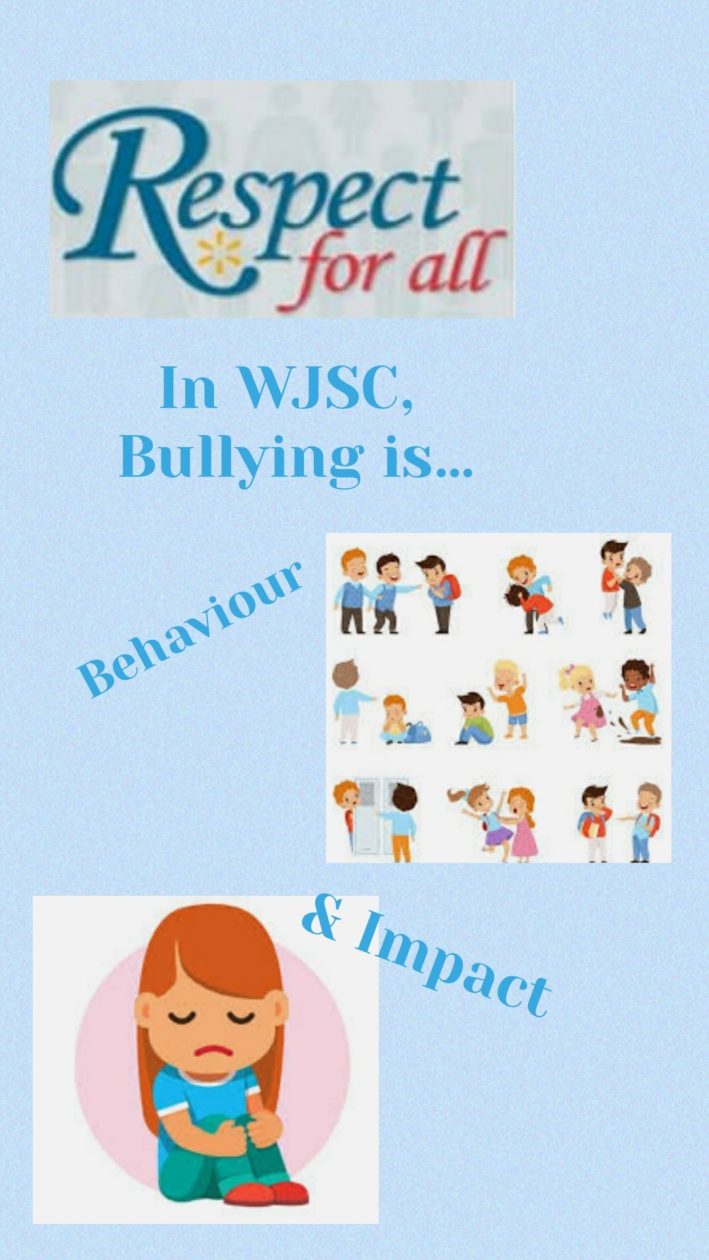 Our Respect for All policy outlines our definition of bullying:

Bullying is both behaviour and impact; the impact is on a person’s capacity to feel in control of themselves. This is what we term as their sense of ‘agency’. Bullying takes place in the context of relationships. It is behaviour that can make people feel hurt, threatened, frightened, left out and lack self-confidence. This behaviour happens face to face and online.

Bullying behaviour can harm people physically or emotionally and, although the actual behaviour may not be repeated, the threat may be sustained over time, typically by actions, looks, messages, confrontations, physical interventions or the fear of these. Bullying behaviour can happen as a one-off incident or can be persistent. Each incident requires investigation to establish whether the
behaviour has been bullying, the impact the behaviour has had and what support is required for all children involved.

In line with ‘Respect for All’ and Renfrewshire Council’s Anti-bullying Policy, West Johnstone Campus recognise that not all disagreements between children and young people are necessarily bullying in nature and the need to consider both the behaviour and impact when investigating and resolving allegations of
bullying behaviour.

Renfrewshire Council and West Johnstone Campus also recognise that labelling children and young people as ‘bullies’ or ‘victims’ can be disempowering and does not help to change behaviour or support recovery from being bullied.

Renfrewshire Council expects adults managing bullying to be able to distinguish between a person and their behaviour. It is also an expectation that all people, including those who are bullying, should always be treated with respect. Not labelling children helps to maintain the adult’s focus and response on the problematic behaviour.

Bullying behaviour can include:

Bullying behaviour may be a result of prejudice that relates to perceived or actual differences. This can lead to behaviour and language that could manifest into racism, sexism, homophobia, biphobia or transphobia or prejudice and discrimination towards disability or faith. Prejudice-based bullying is when bullying behaviour is motivated by prejudice based on an individual’s actual or perceived identity; it can be based on characteristics unique to a member of our school community’s identity or circumstance. For example, prejudice arising from socio-economic background, their ability to learn, mental health or a pupil’s appearance.

Online bullying, or ‘cyberbullying’ as it is often referred to on social networking sites and online gaming platforms, will not be treated any differently from face to-face bullying. A person can be called names, threatened or have rumours spread about them and this can (like other behaviours) happen in person and online. 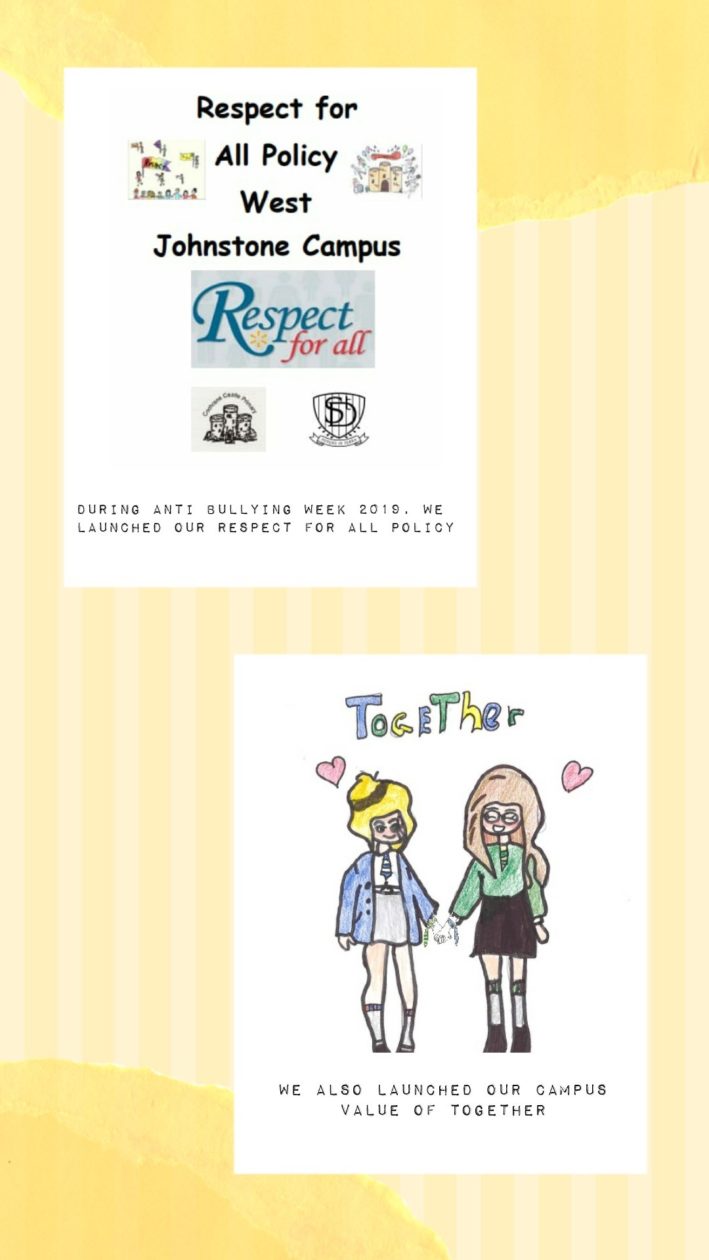 You can find our Respect for All policy here.  This was written in line with Renfrewshire Council’s Anti Bullying Policy, which you can view here.

We created the policy as a Joint Campus as our school communities work so closely together and we believe that everyone who works here, learns here and visits here, deserves to be treated with respect.

All our staff, pupils and parents were consulted in creating this policy and we have captured their views throughout.  We continue to implement our policy in our daily actions and will review it as part of our school improvement cycle.

Our Together logo was launched last Christmas when we merged the winning pupil designs – we think it really represents our school campus vision:

Every day, we work and play, learning ways to get along.
Finding out, what life’s about, everybody moving on. 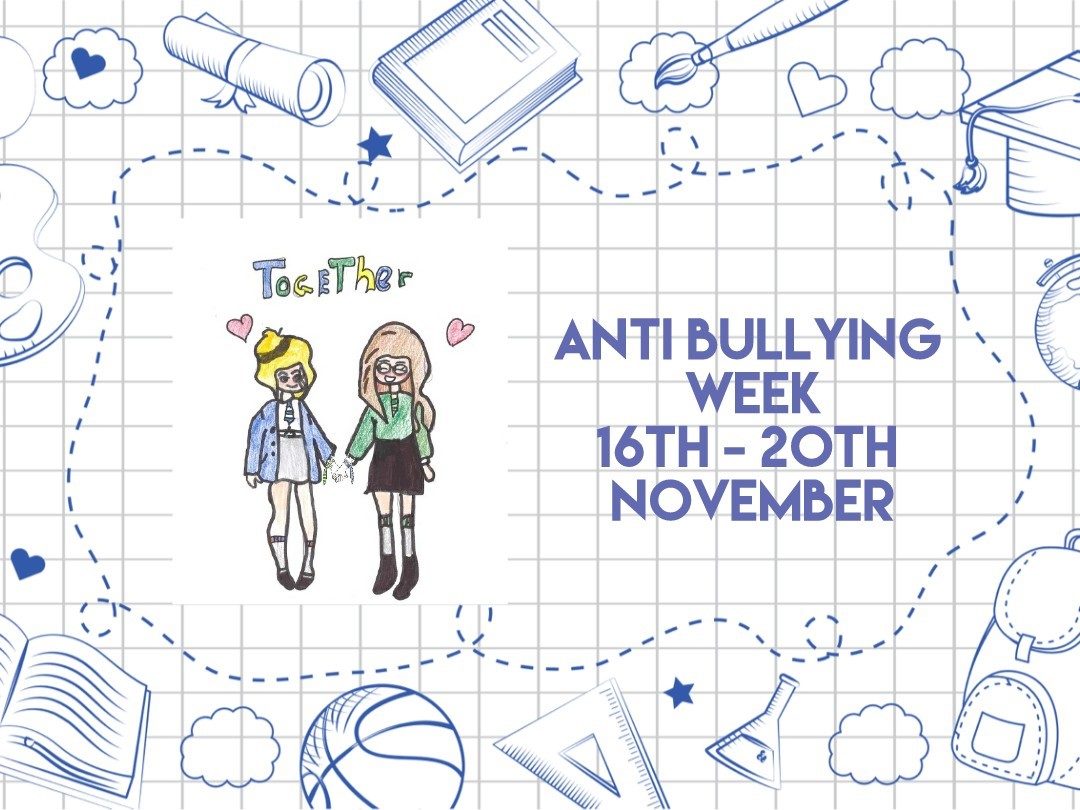 This week we celebrate Anti Bullying Week in our school and across the nation. We are also marking one year since we launched our Joint Campus ‘Respect for All’ Policy which sets out strategies and guidance to promote equality and respect for all in our school community. 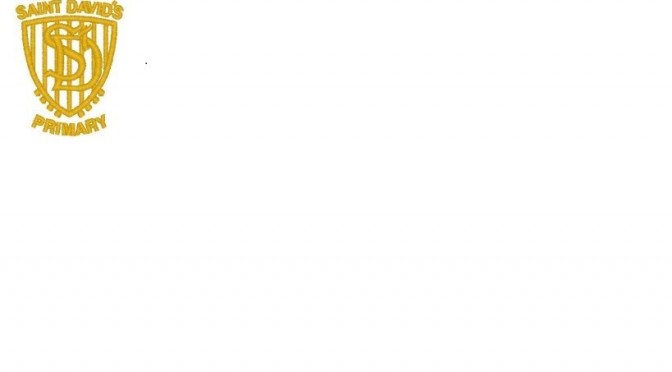