What I have realised recently in my Discovering Maths module is that maths is subconsciously all around us in society especially in areas I was totally unaware of. I would never have realised that art and maths had so many links. There is obviously examples such as the ratio for mixing paints, however this module has opened me up to realise that maths is in the art and day to day life around us. I have already blogged about tessellation and how maths links to Islamic art previously. This alone made me think that maths at school was never creative. However, there is more links to maths and creativity!

The Fibonacci sequence appears in a lot of nature around of such as spirals in waves, in pinecones, in sunflowers, the list is endless. None of these things I would have begun to interpret into maths before. However, I could see myself using these as intriguing maths ideas in my classroom getting children to look more closely at the Fibonacci number sequence. I would allow the children to have a look at Maths, Art,  a pineapple to see if they could figure out the hidden mathematics trying to figure out the pattern before explaining Fibonacci’s sequences and then looking at ideas like the pineapple, to see how it fits into the Fibonacci sequence now they are aware of it.

Some of the ideas that Anna taught us in the lecture I would definitely use in my classroom. Before I tell you which one was the Fibonacci sequence of these two drawing I will allow you to look and decide which you think is more appealing. 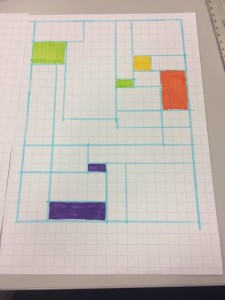 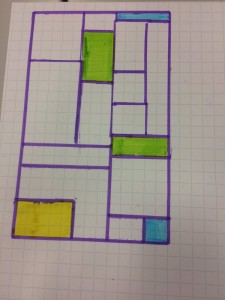 After following the Fibonacci sequence I believe that the Fibonacci sequence may sometimes be hidden into art or subconsciously produced by artists and nature around us but it definitely does, when you are specifically following it, make art seem more attractive. Although, it also took me a lot longer to count the squares to draw it. I feel this would be a more engaging task within maths activity that I could easily use with my middle to upper stage primary school than simply doing number patterns and sequences as well as a great cross curricular link to art.

This has also drawn my interest more into art, as normally I am quite a numerical person and prefer to be surrounded by figures over pictures but the link is something I feel I could delve deeper into to develop my knowledge in art, which is currently quite limited, but still be interested in how the picture came to be and how the Fibonacci numeral system influences it.