Living in a digital world, I ask the question: do we need to teach pupils how to read an analogue clock in schools?

Although most of us have converted to digital clocks in our online, digital world with our smartphones, computers and televisions; we cannot deny that our encounters with analogue clocks are not completely non-existent. There is an argument that in most places we visit – schools, work offices, supermarkets, restaurants and hotels – we most likely still encounter analogue clocks (Merz, 2014). Therefore, is teaching how to read analogue clocks not a necessary skill to teach pupils in school?

According to Merz (2014), many teachers are frustrated with the idea of this skill being disregarded, with the argument that analogue clocks can provide a vivid representation of time that digital clocks cannot – which can aide visual learners. Analogue clocks can also teach concepts including time management, the passage of time and how much time we have left to complete something (Merz, 2014).

However, with our fast-developing technological advances, it is difficult not to wonder if eventually analogue clocks will disappear in our society. Nowadays, we see plasma screen televisions or digital billboards nearly everywhere we go – displaying digital time. Although analogue clocks are often visually appealing and provide nice décor, they don’t really provide any use other than telling the time. It is therefore arguable that digital screens are much more valuable in society as they are multi-purposeful and allow for more creativity (The benefits of digital billboard advertising, 2015). For example, recently in a shopping centre in Edinburgh, I passed a large television screen which displayed the current top news stories, multiple adverts for new products which could be found in the centre, whilst also displaying the time.

Moreover, one of the key issues with teaching pupils about the analogue clock in schools, is how complex it is for pupils to grasp and understand. This light-hearted, comical video highlights the difficulties for young learners learning how to read time:

I partly decided to write this blog post as I was one of the learners in primary school who had difficulties learning about time. I could not wrap my head around the idea of ‘quarter past’, ‘half past’ and ‘quarter to’ (considering we represented every other number on the clock as a number). I also struggled with the concept that there were different ways of reading the clock (e.g. saying 35 past 7 or 25 to 8) which would both be correct. This raises key issues of problem solving and looking at a mathematical concept from multiple perspectives (key skills which are transferrable across all mathematical topics.)

It is important to note that these are aspects of telling the time which apply to both reading the analogue AND digital clock. It is therefore my opinion that the real issue with teaching time to pupils is the concept itself, rather than teaching pupils how to read a particular type of clock. The video above does highlight the difficulties of learning to read an analogue clock – however with the fundamental understanding of the concept of telling the time, I believe that most pupils would welcome the challenge of applying their knowledge to reading an analogue clock. For example, it is vital that children have a strong understanding that 6 is half of 12 to be able to understand why we use the term half past. Another skill which would benefit children before reading an analogue clock is knowing the 5 times table. According to Drabble (2013), without knowing the 5 times table, “anything beyond the o’clocks becomes almost unotainable.” This relates to the idea of longitudinal coherence, introduced by Ma (1999) who states that teachers should use children’s prior knowledge to enhance learning in the topic at hand. It also links with what she writes about basic ideas, meaning that children should revisit the basic concepts they have learned (i.e. fractions and times tables) to understand that they are required for other areas of mathematics (Ma, 1999).

In conclusion, after doing research online and through my own experiences, I believe there is a necessity for teaching pupils about digital and analogue clocks. I believe that we currently live in a world where analogue and digital clocks are both relevant and should therefore both be exposed to pupils. I have realised since studying this issue, that it is important to ensure that pupils understand the principles behind telling the time before introducing them to an analogue OR a digital clock. Furthermore, learning how to read two types of clocks reinforces pupils’ understanding about the concept of time and allows them to practice telling the time from different contexts. This reflects the work of Ma (1999), who highlights the importance of connectedness – meaning that children can link what they have learned to different contexts.

This picture reflects what I saw on my first year placement and shows how to make reading the time on an analogue clock more visually appealing for pupils, whilst also acting as a visual aide (however it is important that pupils realise that they cannot rely on this, as every other analogue clock they see will not be represented in this way!): 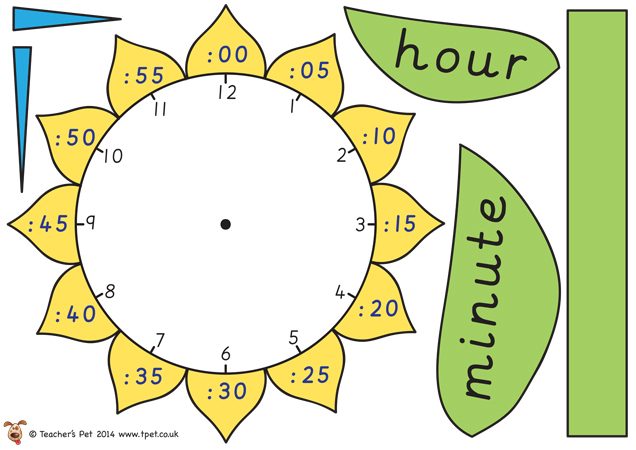