After a thought-provoking lecture and an engaging workshop as an introduction to our values module, I was intrigued to find out more about how we define ourselves as individuals. I therefore took interest in the videos recommended to us by our lecturer; ones which would encourage us to think more deeply about the influence we have on society around us.

The first video I watched I found to be extremely inspirational, as a public speaker encouraged the importance of using your voice and, more importantly, the danger of silence. His main message he wanted people to consider was that if you don’t speak up in a socially unjust situation, then you silently allow it and accept it. He touches on the fact that a lot of people don’t use their voice with the fear of being judged or drawing attention to themselves. However, he wanted to make clear that sitting in silence causes more harm than good. You have no idea of the influence your voice has, either on the people around you or on society as a whole.

Another source which I found highly captivating and emotional was the 2015 documentary, ‘HUMAN’. It questions: what is love? what is being rich? what is being poor? what makes us human? It explains how we link together across the globe; how we may come from different countries, cultures and backgrounds, yet we are all fundamentally linked by the fact we are all human beings.  This documentary also touches on the point about the importance of using your voice, as every person featured in the film had their own personal stories to share. The documentary really makes us question what we do in our daily lives that may have an impact on the world around us. I felt guilty watching this documentary, knowing the background I come from and knowing that, most of the time, I take what I have, or more importantly, what is given to me for granted.

“Let’s switch for a minute” – One of the last lines in the documentary really hits hard the message that we don’t truly know how other people live. We can watch their struggles on the news, read about it, learn about it, but unless we were put in their situation, living the way they do, we could never truly appreciate the difficulties they face.

I particularly found the first interview emotional as it highlights that who we are as people stems from the way we were raised and how we were brought into the world:

Deciding to become a teacher is a commitment, not only to yourself, but to the wider community; a commitment to help to improve the skills and abilities of young people, whilst providing opportunities which allow them to learn in an engaging and exciting environment. Working with young people in a community outside of school made me realise how eager children are to learn and participate, which encouraged me to pursue the programme of Education at the University of Dundee.

After taking an interest in teaching I knew I would need as much experience as possible, not only in a classroom setting but also outside of school. It was important to me that I could understand how children could be taught in completely different ways. This led me to become an assistant dance teacher at a dance school back home – Simon Says Dance. I was often responsible for leading warm ups and working with groups from ages 3-12.

Having experience of working with such a wide age range within one day of teaching, made me realise how young people progress and develop as they become more mature. I discovered I had to change my attitude and the way I was teaching depending on the age group and/or ability. Not only have I gained so much confidence from working with Simon, I have enjoyed watching pupils also become more confident and actively participate and engage in dance, no matter their ability.

I am now looking forward to gaining more knowledge and experience throughout my degree, which will prepare me for my future as a primary teacher. I am particularly looking forward to the placements I will do throughout my 4 years, where I will be able to put what I’ve learned into practice. Although I have been told being a primary teacher requires constant organising, planning and patience, I have also been told it is the most rewarding job anyone could have and I’m excited to see what the next 4 years will bring! 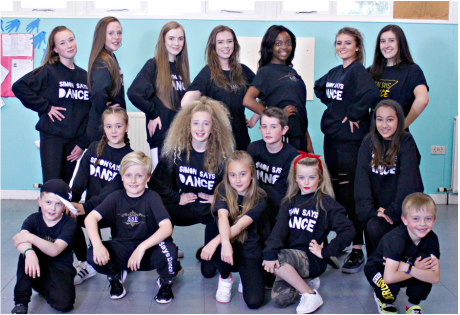