At the beginning of Lockdown, John Swinney stated that schools should, ‘respond in a variety of imaginative, creative and stimulating ways to support continuity in learning for pupils.’

We investigated Twitter and spoke to friends who were also teachers to see what their schools were planning to do in terms of Online Learning during Lockdown and from these various discussions, and taking into account the confidence levels of our staff, we decided to create One Online Learning Microsoft Team which all children would access. We wanted something which was not overwhelming for our staff, children and parents/carers and would be consistent across the school, as we were very aware of the differing levels of skills.

Having the one Online Learning Team for the children meant that we were able to offer a minimum of 3 teacher-led activities per school day each week. This was in addition to the accounts which had already been set up for StudyLadder, Sumdog and the other activity suggestions (both online & offline) which had been added to our Mossend PS & NC Website prior to Lockdown.

In the beginning, we had a daily visual timetable and we worked very closely with NLC Communication Friendly Environments to create these timetables. As we evolved we were able to create a Weekly Visual Timetable which was shared on Twitter, emailed to all parents/carers on a Sunday so they could plan the week ahead and uploaded to the Online Learning Team for the children. 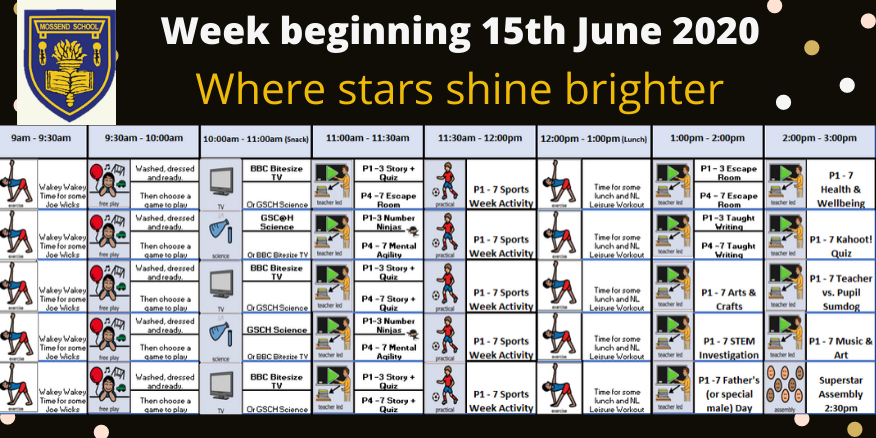 We understood that not all teachers would be comfortable in front of a camera, teaching with parents/carers in the background or using the ICT so, we identified various other jobs which could be completed and would mean the Team would run smoothly and allowed everyone to have a valued role. These jobs included compiling/creating the resources for the stories, creating digital Escape Rooms, creating contexts with a variety of genre for weekly Taught Writing lessons, monitoring Twitter, moderating the Microsoft Team so when work was added the children received feedback, adding Stars to our weekly Star Tracker (each child who uploaded work via Twitter or the Online Team received a star and it was recorded with name, class, date and reason for the star) – this became very important during our weekly Super Star Assemblies held on a Friday afternoon with all staff, children and their parents/carers in attendance. With the whole school working together on one Microsoft Team, it meant we were able to deliver targeted lessons with a variety of high-quality resources which were differentiated and suited to everyone regardless of their needs and every child received a consistent learning experience during the lockdown.

As mentioned in our previous Blog entitled, ‘Unfortunately, Fortunate’ we met virtually every week to plan our strategy which revolved around our Four Key Principles of FAST:

One Microsoft Team gave staff flexibility over tasks meaning they were not tied to a class Team all week and were able to engage in other CPD around Microsoft Apps, Digital Learning Webinars and report cards. This made sense to us because, rather than having more than 20+ teachers working with 5/6 children daily, we were able to establish a number of teachers working with lots of children in the one Microsoft Team, all engaged in purposeful, meaningful and worthwhile learning. This allowed our staff the flexibility to get to grips with Microsoft Teams, to observe other’s online lessons and to adjust to the ‘new normal’ at their own pace. Working collaboratively reduced the workload for us all and allowed us to sustain our online learning offering across the Lockdown period.

Our Online Learning Team was in an accessible format because all of our children had access via their Glow login details and this allowed us to use Microsoft Teams to create a Virtual Learning Environment (VLE) for live calls to take place. From the outset, we knew we wanted to create a VLE where children could engage with their teachers and peers and it was not just about uploading files for independent work. By having this level of engagement we were taking into consideration the health and wellbeing of our children at an uncertain time in their lives, we understood the need for them to see and speak to their teachers as well as having opportunities to collaborate with their peers. This led to quality teaching and interaction within an accessible ‘one-stop-shop’ VLE. 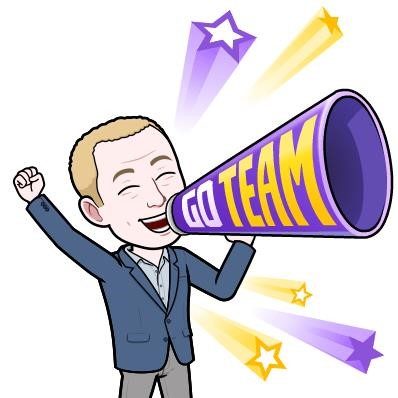 From the beginning, we encouraged pupils to sign up to join our Microsoft Online Team, but we didn’t add anyone. They chose if they wanted to join – therefore engagement was high.  We understood that our parents/carers were now taking on a very different role and not all felt confident with ICT. As a result, we supported them with videos on how to download Teams on various devices and provided technical help using Microsoft Forms for passwords.  Having this VLE allowed us to have a Weekly Super Star Assembly with the whole school community as well as facilitating countless occasions for the children to work with their friends.

Our Microsoft Team was created almost instantly and we introduced it via Twitter, email and text with a signup request form, adding all users who requested access. By acting with speed, we were quick off the mark in establishing our VLE and developing our ‘new normal’ at a time when everyone just wanted to know what was happening. We believe this reassured our families that we had a plan for the continuity of learning and allowed them to join our Team when it suited their circumstances. 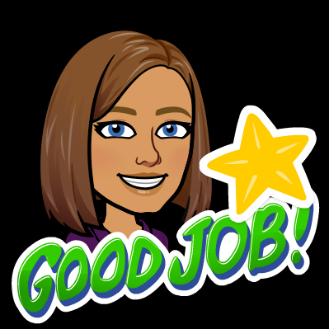 We firmly believe that having this approach certainly answered John Swinney’s call for schools to be creative in how they engaged with families and facilitating the learning opportunities for all our young people.

Patricia McKay is the Depute Head Teacher at Mossend PS & NC in North Lanarkshire and Gordon Reid is a class teacher and ICT Co-ordinator. Together they facilitated and led the remote learning strategy for the school.

Mossend PS & NC is a non-denominational school situated in Bellshill, North Lanarkshire. The school has 382 pupils and there are 40 children in the nursery attached to the school.