For this week’s lesson we were set the task of creating our own educational resource using a Beebot programmable toy. Before the input we were able to decide whether we wished to work as an individual or in a group and I decided to join a group with two others. Prior to our time in the classroom, my group and I met in order to discuss our ideas and finalise a basic plan for the resource. I feel this was beneficial as it allowed us to use all the time that we had during class to focus on the making of the product. When we met again during class time we briefly re visited our plan and made sure that everyone agreed on what the final product would be. We then finalised which learning outcome was best suited to our resource as this had only been loosely mentioned before and then we divided out roles and began creating. I feel this approach worked well as we were able to use our time effectively and divide jobs fairly, playing to people’s individual strengths, in order to do so. I feel that as a group we were also very good at feeding back to each other about our progress and checking with each other to ensure all of us were included in all aspects. One challenge that we did face when we came to use the Beebot was that once we had programmed it to go to one position, we then put in the sequence to send it to the next location on our mat and Beebot would follow the whole sequence. We soon realised that we had to press clear to remove the sequence from the Beebots memory to then give it instructions to go to the next position. 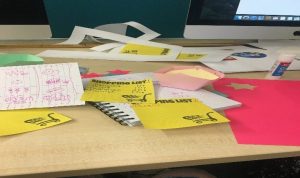 As a group we decided to make our resource a shopping design. We first came up with the idea to have items laid out on the board with various prices which the pupils would have to add together in order to calculate the total of their shopping. We felt that the best way to do so was through giving the children shopping lists with the items that they would have to programme the Beebot to go to and with the cost of each individual item marked on it. We then came across the issue of having to figure out a way in which the children could find out if they correctly calculated the total so that the resource could be used with minimal teacher input. We then decided that Beebot would travel to the items on the shopping list then to a basket with what the children believe is the correct total on it. At this point the child would also have to work out the change in which they would receive before opening a receipt that will be in the basket, which would tell them both the accurate total and change.

We decided that we wanted to make the board interchangeable so that it could be altered to be used for differing abilities, ensuring that the children can be challenged just enough whilst carrying out the task. 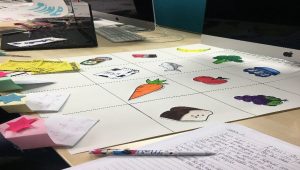 The outcome which we decided best suited our resource was from first level in the number, money and measure category:

The children will meet this outcome through the calculations which they do in order to find the correct basket and work out what many they will get back from the original amount of money that they are given.

I feel that as a group we should have made the experiences and outcomes our starting point for coming up with our idea as this could’ve sped up this part of the process by giving us a further stimulus. 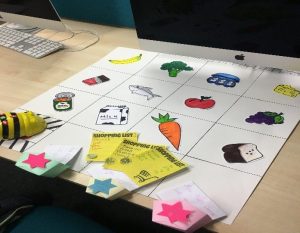 Programmable toys have a valuable place in today’s curriculum. They open the opportunity for children to discuss with each other and use the language of mathematics in an applied sense. It is stated by the National Centre for Technology in Education that such resources “encourage group interaction, conversation and collaboration”. This can be seen in that when programming the bot, pupils will have to discuss with each other using directional language such as forwards, backwards, left and right in order to work together in an effective manner to reach the same goal, as I had to with my group when we were trialing the resource. This is further backed up by Janka who states that as part of the British curriculum “children should develop the ability to describe simple journey and instruct the programmable toy in order to develop position language and estimation”. Showing that the use of this language is a vital part of a child’s education.

In conclusion, I feel that the skills which I have learned and put into practice during this session will be of great value to me as both a student teacher and when I become qualified. I have enjoyed my time getting to know the resource and I have seen all the different ways in which it can be used to meet various different outcomes. Additionally I now have knowledge on its value within a classroom.

Janka, P. (2008) Using a Programmable Toy at Preschool Age: Why and How? Intl. Conf. on Simulation, Modeling and Programming for Autonomous Robots.  pp. 112-121.