In this week’s lesson we were familiarising ourselves with ‘Activinspire’ which is a programme that is used as a means for interactive learning in many of todays classrooms. It is a good resource to introduce the use of multimodal texts with its many possibilities. The definition of a multimodal text is one which combines two or more of the five semiotic systems which are:

Multi modal texts are an effective tool in the classroom as Beauchamp states that they are believed to “make work more motivating and interesting” (Beauchamp,2012, p.8). I agree with this statement as these types of texts can cater to many different learners in using different styles and this was something which I had experienced on placement as it was a tool which grabbed the pupil’s attentions greatly for example in the use of the interactive smartboard and video clips.

It is recognised by the government that technologies which can be used for creating multimodal texts are valuable within a classroom setting. As part of their challenge to tackle the attainment gap the Scottish Government are providing qualifying schools with an equity fund allowing for them “to deliver activities, interventions or resources which are clearly additional to those which were already planned.” (Scottish Government, 2018). The funding available could be used for resources such as interactive whiteboards and iPads which provide great opportunities for creating and using multimodal texts. I agree that providing the schools with funding for these materials is a great way to expose the pupils to many different forms of multimodal texts. However, I also believe that it is essential that teachers understand how to best use these programmes. It was stated by Beauchamp that “The ability of ICT to present ideas in a variety of ways can help to structure new experiences but only if you as the teacher have sufficient understanding on the area yourself.” which I agree with in that schools may spend their equity fund on resources which may seem helpful however, they may not end up being used to their fullest potential due to the lack of expertise on how to do so. 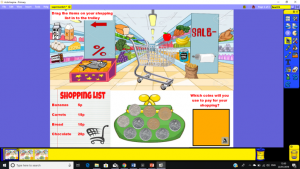 The task which we were set was to come up with our own multimodal interactive presentation. We decided to base ours around a similar concept of the shopping task we had completed the previous week and used the same curricular outcome of I can use money to pay for items and can work out how much change I will receive. NMU 1-09a. We decided to create a supermarket setting with shopping lists in which the children had to drag the objects on their list into a trolley and then drag the various coins out of a purse to pay the correct amount. We also added a cash register sound effect to encompass another one of the semiotic systems. 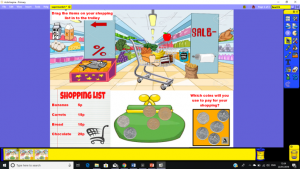 We began by playing around with the various functions on the Activinspire software and started to find out what we could use. To begin with we used a picture as a background but soon realized that we could set the page background as any picture we wished and decided this would be better as the picture wouldn’t move around. One struggle that we faced was in finding out how to duplicate a page as we wished to use the same look on all our pages but different variations of coins and items on the shopping lists and we hoped that there was a way to do this without starting from the beginning each time. After trying many different possibilities, we eventually found the correct way to do so and were able to continue with creating our resource. Another struggle which we faced was that in the version which we had downloaded some of the tools were not as easily accessible as others and we struggled to find how to insert shapes. In the end we had to find an alternative way of creating the effect which we wished to use. 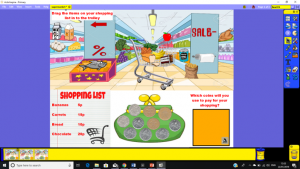 Overall, I believe that Activinspire is a great resource for the use of multimodal texts within the classroom due to its many possibilities in covering an extensive range of curricular outcomes. It provides a great range of handy tools and now that I have taken time to familiarise myself with how to access these I would feel comfortable using this as a resource within a classroom.

Beauchamp, G. (2012) ICT in the Primary School: From Pedagogy to Practice. Pearson.