In this week’s session we embarked on another assessment task, this time in coding. Prior to this session I had never tried coding before and was interested to see how it worked and where it could place itself within the curriculum as well as being excited to gain new skills in using this resource. The coding software which we were using was called Scratch Jr and is a simplistic version of coding which is perfect for the primary school stage.

Coding programmes such as scratch can fit into various areas of the curriculum with ease due to its many possibilities and can easily incorporate cross-curricular learning experiences. For example scratch could be used to tell a story which would encompass literacy aspects of the curriculum along with technologies.

It is stated by John Naughton that coding is important as a part of the curriculum as children are surrounded by computer technologies in their day to day lives and if they weren’t opened up to the world of coding, they would be passively consuming such services and goods (The Observer, 2012). I feel that it is important that as teachers we allow our pupils the opportunities to believe they can become the pioneers of such technologies rather than just the consumers.

We were set the task of creating our own interactive story using the Scratch Jr app, covering some literacy outcomes.  I decided that I was going to have my story focus on phonics skills and have my character go on a journey which the reader could join in on. To begin with I explored the app to find out what I could make the character do as well as what tools there were. I decided that I wanted to have an interactive element to my story in order to include the reader as best I could. 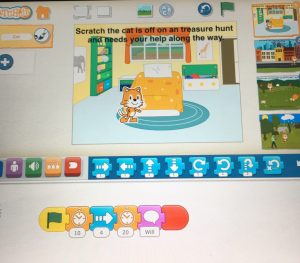 Once I had come up with an idea, I decided to look at the curriculum experiences and outcomes and see what areas I could cover. I realised that I could easily cover these literacy outcomes:

In providing this task to pupils, in addition to covering literacy outcomes, they would cover many aspects of the technologies outcomes such as: 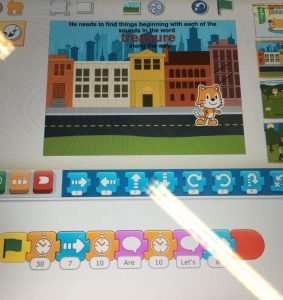 My idea was to have the reader find items within the story beginning with each letter of the word ‘treasure’ allowing them to work on their knowledge of the sounds of words within our language and what there made up of. I would then programme the character to move to each of these items. I had to look at the options available to me on the app in terms of the background and had to think as to what I could include within these scenes for there to be an item in each one which started with the correct letter. 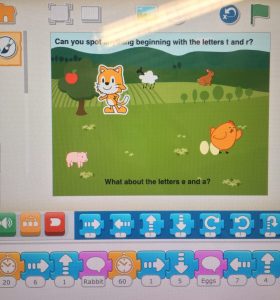 Whilst using the Scratch Jr programme for the first time I faced some challenges. I could not figure out if there was an option to use one of my own backgrounds so I had to look at the given ones and think of ways in which I could alter those to still give me the desired effect. Also, when using the app, I was unaware that there was a limit to only 4 pages, so once I had done the work and reached this limit I had to re-think my concept and figure out how I could condense this. I feel as though this may frustrate pupils as it provides limits to their creativity. However, it could be advantageous in that class time may be limited and in having that restriction in place it could prevent this from being a lesson that lasts over many weeks. To begin with it was also difficult to get the timing correct for the characters to move to the correct place and speak at the correct time. However, this also may come as an advantage in a classroom setting as it allows for children to use their problem-solving skills and see what works best. 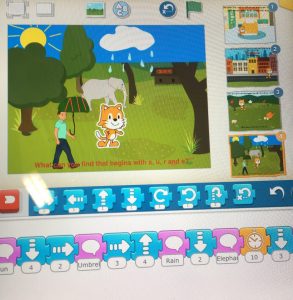 It is stated that in using Scratch children “are not just learning how to write computer programs. They are learning to think creatively, reason systematically, and work collaboratively.” (The Lead Project, 2014). I agree with this statement in that when I was figuring out the programme I myself had to think in a creative way in figuring out how make my idea a reality. I also had to ensure that I was working in a methodical way to ensure that things ran the way in which I wished. I also had to work alongside others in that for most of us it was our first experience using Scratch Jr and we all had to share what we had found and information on how to do things. I believe that because of all these benefits, coding is a great aspect of technologies to include into lesson plans and one which I will be using in the future.