In today’s lesson we were learning about QR Codes and their uses within a classroom setting.

We began by discussing what QR Code were learning that they are an image code which can be programmed to contain images, text and web links.

We were set the task of creating a treasure hunt that could be used in an educational setting using QR codes.

Once I got together with my group the first thing that we did was share our ideas. It was suggested that we based our treasure hunt off a previous lesson which we had planned. This is when I raised the idea of basing it off a shopping task which involved using money and working out change. We all agreed that this was a good idea and problem solved as a group to figure out how we could turn this into a treasure hunt. In reflection I feel that this was an important part of our planning stage as everyone worked together well to figure out a solution. I feel that this is a vital skill to have as a teacher as not everything runs as smoothly as planned.

We came to the decision that our treasure hunt would start with the pupils having to find out the answer to a calculation using currency. The answer to this calculation would tell them the number of the room which they had to go to in order to find the next QR code which would reveal an item on the shopping list which they could cross off and the next calculation to find out the next room number. The pupils would have to record their findings along the way as at the end they would add up the total of all the amounts calculated. 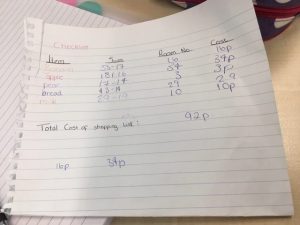 We then had to decide what stage we would make our treasure hunt for so that we could make sure that the calculations and language were suited. We decided upon first level however, I feel that this task could easily be adapted for 2nd level by using more complex calculations such as multiplication making it a perfect activity for a mixed ability or composite class. 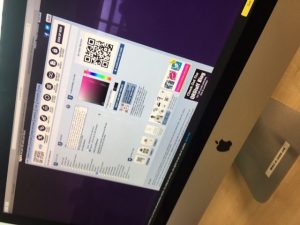 We used an online QR Code generator to make our QR codes. This was easily accessible and straight forward to use. The only issue which we faced at this stage was that we could not add pictures. I feel that if I was to repeat this task again I would either printout picture to place alongside the QR codes in their positions or find another QR code generator that allows me to do this in order to add this element.

Our planned task covered outcomes in the curriculum such as:

I believe that the QR code activity provides a great chance for children to learn in a more active way than sitting at a desk as pupils can go from one end of the building to the other to find the correct clues. This therefore helps in them meeting one of the eight wellbeing indicators of being active. (Scottish Government, 2017) 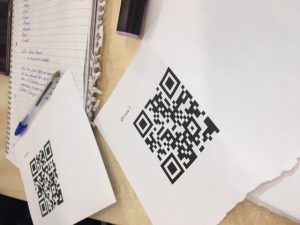 QR codes also provide a great opportunity for outdoor learning. A treasure hunt task could easily send children outdoors exploring the environment, adding this aspect could further develop a child’s excitement for the task and therefore providing opportunities for deeper understanding. This is also stated by Learning and Teaching Scotland who appreciate that outdoor learning opportunities are memorable and “provide relevance and depth to the curriculum in ways which are difficult to achieve indoors” (Learning and Teaching Scotland, 2010).

It is for these reasons that I believe QR codes are a great addition to the classroom and would hope to have the opportunity to try out a QR code related task in my classroom one day.

Learning and Teaching Scotland (2010) Curriculum for Excellence Through Outdoor Learning

Scottish Government (2017) Getting It Right for Every Child. [online] available at: https://www.gov.scot/policies/girfec/wellbeing-indicators-shanarri/ [accessed on 14th March 2019]