I know this isn’t a digital post – in fact, it is a personal one.  I will post a short digital blog tomorrow, but after my various concerts this week I have been reflecting quite considerably on how music has allowed me to get to the position that I am in.

Some of the comments over the week such as ‘please don’t tag my school as I might be bullied’ when doing posts about our learning and ‘my son’s dyslexia is really benefiting from his time in choir’ have made me really want to make this post.

In this blog, amongst other things, I want to share my experience as a young boy learning music; singing with school choirs and mixed choirs, and bullying that came with that; finding out about the National Boys Choir and then progressing through NYCOS to singing across the world with them; before studying at the RSAMD and setting out to be a teacher with a goal to bring music to children.

I don’t normally do personal blogs, but today I really want to just describe my journey into teaching and how music truly shaped who I am today.  I hope that this post inspires you to find avenues for your children – especially boys – into music as I wouldn’t be where I am without it, and I know that I speak for many people and not just myself when I say that.

Why is music important?

Have you ever tried watching a scene from a movie that has had the music cut?

In fact, rather than me talking about it, just ‘enjoy’ the below clip from Jurassic park with no music.

The fact of the matter is that music is part of life, and educating ourselves to appreciate, enjoy and create music is vital.  Many studies can be found that show the scientific and educational value of music – that’s not what I want to look at today though.  Today, I just want to let you all see how music changed my life in the hopes that it will change other lives in the same way.

The Bullies vs Boys

So, I am going to write from the point of view of a boy.  Not only because I am a (sort of grown up) boy, but also because boys are the most likely statistically to be put off from studying music.  In most people’s minds, there’s ‘cool’ or ‘good’ music and there’s ‘uncool’ or ‘bad’ music.  Realistically though, there is just music.  To appreciate one type of music, you should be able to appreciate (even if you don’t like) other types of music.

What I’m trying to say is that to learn music, you have to practice and join a choir or a band or get lessons or experiment.  However, some people may not ‘like’ the type of music that you are learning or studying, and so pick on you for it.  As a child, I studied singing, flute and bagpipes (and dabbled in guitar and piano).  It was my choice, and I wasn’t pushed into it.  However, I nearly stopped many times due to the incredible bullying that I received for it.  I was targeted with homophobic language, physically beaten regularly, and it was more often that I would be addressed as ‘singer boy’ or ‘nerd’ when homophobic language wasn’t being used.  I am only 28 years old just now, so we are not talking many decades ago – in fact, all of this happened within the last 10-15 years.  I was driven to self harm, drink and smoke to try and seem ‘cool’ at that age – and why?  Singing in school choirs, as one of only two boys, in an otherwise girl dominated environment actually nearly stopped me from singing all together.  The other boy did stop.

I am not saying that girls aren’t the target of this sort of hate for studying music, I know that’s not true, but again we need to encourage more boys to develop their creativity. 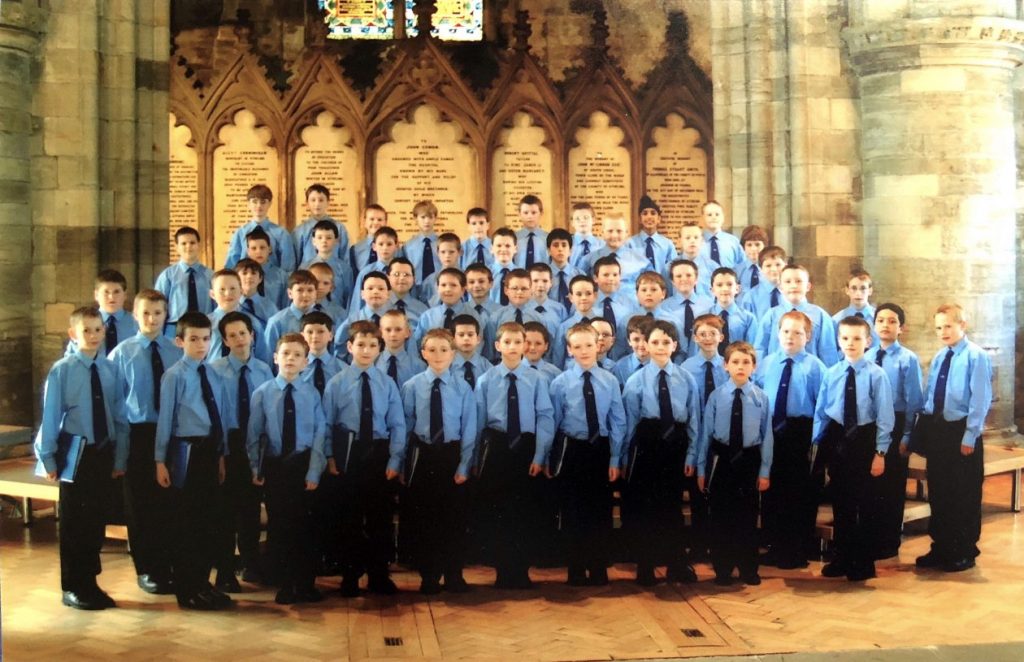 It was just at the time that I was going to stop singing all together – when I was at the lowest point of my young life, in 2002, that a flyer for a new ‘boys only’ choir came to our school.  The National Boys Choir; part of the National Youth Choir Of Scotland.  I liked this idea; a place where I could sing and be myself and make friends with boys that had similar interests.  If you look closely, you might even spot me in the picture – second boy in the back row from the left.

Sure enough, I made my lifelong friends in NBC and later in NYCOS too – friends which I still hold dear, and I was able to get a music scholarship to Lomond School where I got away from the bullies.  My story was lucky in that sense – I kept going.  Many didn’t though, and I know that lots of the boys who came to NBC still had the issue of bullying to contend with and did eventually stop singing.

The National Youth Choir Of Scotland 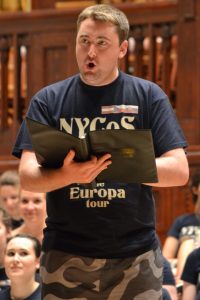 As I progressed through NBC and NYCOS, I was given so many opportunities.  Firstly, and most importantly was the musical education that I received.  NYCOS use Kodaly methodology to teach music through fun and active games.  You can find out more about the NYCOS approach here.  As well as a first class musical education, I was able to travel literally all over the world singing with the choir.

From touring Germany, Hungary, Central Europe, Chicago and Wyoming; I sang in the Royal Albert Hall, had solos in the Mozart Requiem in the Cathedral in Vienna that Mozart was married.  In Chicago, I was one of the choir who sang in front of 15’000 people for their Independence Day concert.  I’ve worked with world class conductors, and the most inspirational choral director – Christopher Bell.

Even though I was not a professional musician, music had shaped my life, and I took it to the next step when I was accepted into the RSAMD (now RCS) to study on the BMus Singing course.

Even though I was studying music, teaching was where I wanted to go.  I wanted to make a difference and give children the opportunity that I had.  I worked with several choirs, including Coisir nam Balach, the RJs, Helensburgh Dorian Choir and even won some prestigious awards with Govan Gaelic Choir.  However, the choir that has given me the most satisfaction is NYCOS East Dunbartonshire Boys Choir, which I started in 2012.  Giving boys the safe environment to sing that I was blessed with a decade before was huge to me, and I have been so lucky to watch the boys grow and successfully apply for the National Boys Choir, with one this year applying for main NYCOS.

These boys are lucky as I know that they are getting an incredible music education in a world where music is becoming a novelty and very expensive.  With music cuts, I do worry about the future of music.  However, there are places out there for our children.  Others can have the same chance I did.  NYCOS have 14 regional choirs based around Scotland.  You can find them all here.  My one, NYCOS East Dunbartonshire Boys (NYCOS ED), and the NYCOS Perth Boys Choir  (NYCOS PBC) are exclusively for boys, whilst the other twelve are mixed choirs, but all put a huge emphasis on music education as well as being a ‘choir’.

If you have children that you see moving away from music, I couldn’t recommend them enough.

This year NYCOS ED and PBS teamed up and sang in front of approximately 8000 people as part of the Edinburgh Light Night celebration, in addition to performing their own concerts.  As well as that, they have all been developing their musicianship skills on a weekly basis with highly trained and inspirational staff.

My choir is on Twitter and on Facebook, so do check out some of the work that we do.

I truly believe that without the musical education that I had, I wouldn’t be a teacher.  In fact, I might have never left the school in which I was the target of bullying.  I truly don’t know what would have happened, and I’m not sure I really want to know.

Music saved me and music made me, and even though in school my focus is all things digital, that is because I am in a school that already has a huge focus on music. The opportunities for the children in my school are already great.  Were I in a different school without such a push for music, I know my focus would be on making it a priority.