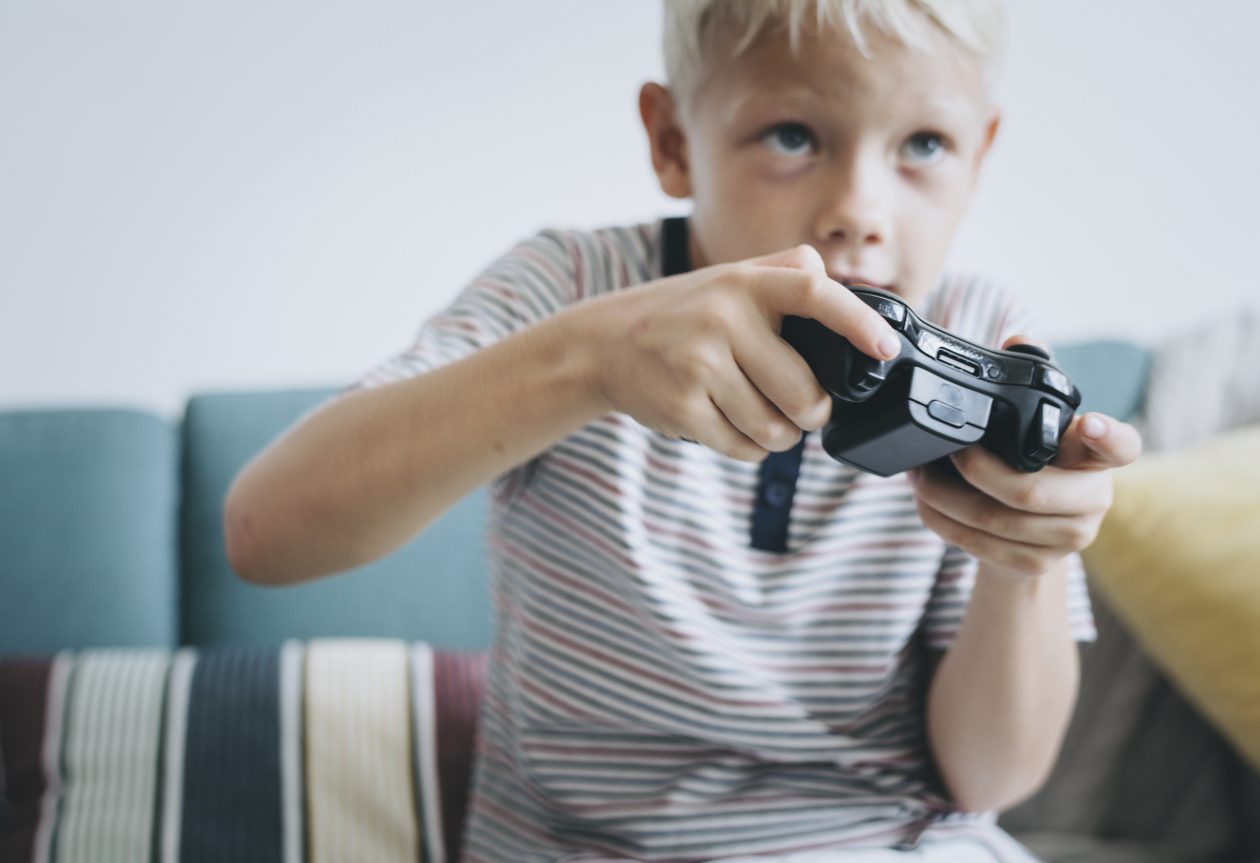 Children love playing; that much has always been true – in fact, our children learn best from playing with their friends.  In the digital age, there is a new playground – a virtual one – where children talk to their friends and play with them.  Learning core social skills now happens just as much online as in the ‘real’ world.  Unfortunately, as with real playgrounds, there are risks (such as stranger-danger), and it is important to educate our young people as well as ourselves about these dangers.

The media however has posted a lot of scare-stories about online gaming, and it is important to also look at these. It is often the case that banning our children from playing a game can create more of a problem than letting them play (I’ll justify this statement below.)

Of course, the decision as to what games children should be able to play has always and will always remain with parents; but I would strongly urge all parents to actually play games with their children from time to time, so that children feel more comfortable about speaking to you when something goes wrong – they are more likely to see you as someone who will “get it” and not someone that will just ban them because, and I quote a child here that I know, “you don’t understand”.

This is something that I am quite passionate about, as unfortunately it happens all the time.  I will use an anonymous ‘case study’ in this section – a child that I has come to me with an e-safety problem.

The most notable recent case of poorly handled headlines, came with the fairly recent story about the game ‘Fortnite’.  You can read the article that I am referring to here.  It should be noted that most follow-up articles such as the BBC one, did include good advice. However, after reading the headline, in most cases the damage was done and many parents banned their children outright from playing.

A number of you reading this may wonder why I am concerned about children being banned from playing a game, as, if it helps to keep children safe surely it’s a good thing?  I would argue that banning a child from playing a game because of something you have read or because something ‘went wrong’ is very counter-productive.  By banning a game outright, you are sending a message to your child that ‘if I find out something bad about a game, you won’t be able to play it’.  This means, almost certainly, that a child will not speak to their parents about something that has worried them online in fear that it may cause them to be banned.  It is essentially like saying to a child, I heard there was something bad discovered in a local park and so they are never able to play there again.  Secondly, if that child’s friends all play the game, they will be missing out on playtime with their friends.  This will likely make them want to go to their friends house to play the game without your permission.  I speak here, not from guess work, nor from quoting articles, but rather from personally knowing a child for whom this was the reality.  When the article in question was released, she was banned from playing the game.  She has since played it at several of her friends’ houses.  She spoke to me about it because someone had tried to ask her and her friends about personal information online, and she didn’t want to talk to her parents about it because she would be in trouble.

Let’s look again at the game Fortnite, and the article.  The article states that “FORTNITE has been blasted for its violence and predatory voice and text chat features in a new child safety warning from the NSPCC.” It is true that children can voice and text chat with people that they don’t know on Fortnite – but this is the case for almost all online games.  This is indeed true for social media, for YouTube.  Notably though, it is also the case in the ‘real’ world.  What do we do for our children in the ‘real world’ though?  We go with them.  We show them how to interact with people.  We teach them how to stay safe, and we teach them not to talk to strangers; or at least not to share personal information with strangers.  Why is the same not true on gaming?  You can actually turn off voice chat in every game, or restrict it to your friends only.  In school, I teach that sometimes online it is okay to talk to people that you don’t know – in the same way that it’s okay to sometimes do it in the real world.  Sometimes, you need to chat to achieve a goal.  In a supermarket, you may need to ask where something is in the shop.  In the playground, you may need to ask another parent what the time is.  In the gaming world, you may need to ask for help in completing a quest.  This is called ‘safe’ chat.  However, in the supermarket, the playground, or online if someone is asking you personal information (where do you live, what school do you go to, how old are you) it’s not ‘safe chat’.  If you ask someone how to find the baked beans in a shop and they ask you how old you are and where you live, you’d run pretty quickly – at least, you should. The same is true online.  Instead of banning your child, you need to teach them about staying safe, else they will never be safe.  Children need to learn how to stay safe so that when something does go wrong, or someone tries to talk to them, they can react appropriately.

The reason that I say all of this, is, even if you disable chat on the games, or stop your child from playing them, they can still add ‘friends’ on other social media platforms, or even on their consoles.  This is great if they are adding their own friends and chatting/playing with them – but in many cases, children are adding people that they don’t know.  These are sometimes people that they have found in games, or people that have just tried to add them.  Sometimes these people are genuinely just other children looking for more friends – children that haven’t been given adequate e-safety training.  And, if a child hasn’t been talked to properly about the dangers that may arise from communicating with someone that you don’t know, they may accept this request without a single thought.  What’s more dangerous: communicating in a public forum about a game but understanding the risks of revealing any personal information, or having someone that you don’t know as a ‘friend’ who is able to talk to you in private?  Is it the ‘game’ that’s the problem?  I don’t think so.  The problem is a lack of understanding.

Let’s also look at the ‘violence’ mentioned in the article. Some people feel that as Fortnite is a ‘battle’ game, it will be too violent for their children; however, as games go, it is cartoony and very unrealistic making it a very good game for all ages – I do play it so I may be bias, but I would let my children play it if I have any in the future.  In my mind, the violence in the new Power Rangers, Ninja Turtles and Batman movies is far worse, and yet many children are allowed to watch them.  It is however, very much a parent’s personal decision as to wether or not this is a factor as to whether a child can play a game or not – though, I would suggest my below solution is a good compromise.

So, what’s the solution?

If you read something about a game that your child plays, play the game with your child or at least ask them to teach you how to play.  You’ll only need 15-30 minutes to get a good idea of the potential dangers, see if your child has chat turned on/off, and decide whether it is appropriate for your child.  Not only is it fun, and a great way of bonding with your “child that is always in their room playing on that device” (I quote my own mum here!) it is truly the best way to get to know what your child is playing and talk to them about e-safety.  Why not ask them to show you who their ‘friends’ are?  If they can’t tell you who someone is and how they know them – don’t tell them off, talk to them about why it’s not a good idea so that they will make the decision to remove that person.  By working in this way, you will build up the trust that, if something does go wrong online in the future – e.g. someone sends your child an inappropriate message – they will feel comfortable to talk to you about it.

If you don’t like the game that your child is playing, talk to them about why you don’t like it – don’t ban them without letting them understand why.  Also, banning a child after letting them play it initially is far worse than banning a child from getting the game.  Before your child gets a game, I’d suggest watching YouTube gameplay of the game they are planning on getting.  You will see someone else playing the game which will let you see how suitable it is for your child.

I know of some people that have banned Fortnite after the article was published, yet still allow their children to play games such as Grand Theft Auto (rated 18) which allows the player to simulate acts such as murder, robbery, and even the use of prostitutes in quite a realistic manner.  It is a game that I personally find disgusting and often too graphic, yet, as some parents haven’t played this with their children, they haven’t seen the impact that it may have on their youngsters.

E-safety is an important part of the curriculum, but, like subjects such as: sexual health and relationships, health and wellbeing, and reading, a lot of the learning happens at home while they are either talking to you, carrying out the activity, or talking to their friends.  If they learn in isolation without guidance, it is like putting your child into the middle of the city centre and asking them to get home.  They will probably manage, but they will face many obstacles and talk to lots of people and learn the hard way.

There are lots of great articles, advice, and even youtube tips out there.  I will update this section often with any that I find: