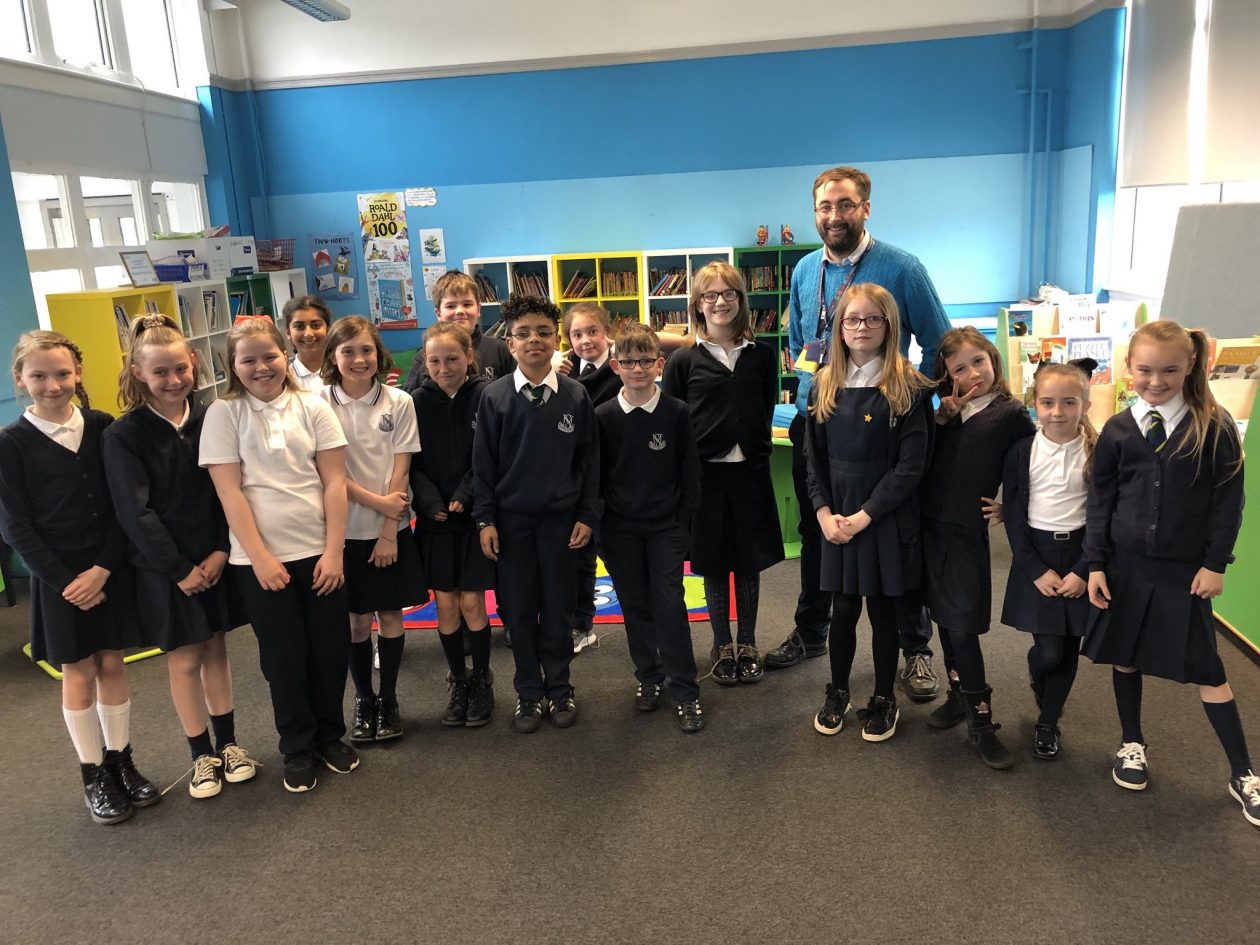 Starting your own ‘Digital Leaders’ Team

Pupil Council, Eco Committee, JRSO, etc. – schools have so many different forums now for children to be involved in their school community and have their voice. Each of these forums can be transformational to the life and running of the school whilst benefiting learners.  However, if used as an ‘add-on’ or a ‘box-ticking’ exercise, they can also be a monumental waste of time.

I have been fortunate to run a very successful team of digital leaders in Mosspark Primary, known as the Tech Team, and I hope that this article will let you see, not only the benefits of having a Tech Team, but how to set up a digital leaders’ team with a similar model and run it so that it has a measurable impact in raising attainment through digital learning.  Please note that there are so many examples of great digital leaders’ teams out there, and by accessing professional learning networks, such as Twitter, you will be continually inspired in the running of your own digital leaders.  I would also like to point out that there are official programs for children to be involved in, including childnet’s digital leader training program, that will not only train your children, but allow you access to a wealth of resources and a community of other digital leaders. 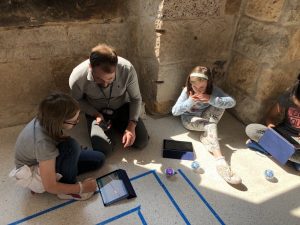 The main problem with getting started is identifying a member of staff who will take forward the digital leaders’ program within the school.  Ideally, that person will be you – the person reading this – as that person must have the passion to take it forward.  I mentioned other similar ‘committees’ that are held in schools: often are these run by a member of staff that has been ‘given’ it to run.  There are so many examples of great pupil councils and great eco committees that truly have an impact in their school, but similarly there are many examples of those that do not.  If your school is going to invest in a Tech Team, you must make sure that someone is willing and able to commit the time needed.

Identifying children that are not only keen but dedicated is crucial.  We run on a ‘no opt-out’ basis: that is to say, once you’re in, you’re in it for the year.  When I’m pitching the Tech Team to the P5-7s, I make sure that I tell them about the ‘bad’ stuff and skim over the ‘good’ stuff.  Rather than saying ‘we’ll be going on trips to…’ I say you will be giving up a lunch time each week and sometimes class time too.  Rather than saying ‘we’ll be learning about really cool…’ I say ‘we’ll be presenting to classes and assemblies’.  I need to make sure that the children that put themselves forward really want to do it and won’t be put off after joining by the commitment involved.

Finally, I interview all of the children that have completed the application process to try to determine who would benefit the most from being a member of the Tech Team.

I find that either 10 or 15 members in a Team is perfect, as you will see in the ‘duties’ section.

‘Pupil voice’ and ‘children leading learning’ are the two biggest parts of a Tech Team.  The first meeting should be to identify roles within the team.  In the same way that a good pupil council will run with children chairing and leading meetings, a Tech Team should be no different.  In the first meeting, the children learn about the roles of a chair-person, vice-chairperson, secretary and vice-secretary and then vote on the person that they feel would be best to take each role.  This is of course entirely optional but does form a huge part of how my Tech Team runs, as, prior to a monthly meeting, the chairperson, secretary (and sometimes vices) meet with me to set the agenda for the coming main meeting and voice any concerns that have been raised.

Following this initial meeting, we then have two types of meeting: 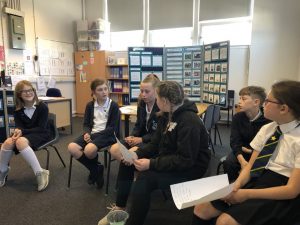 This meeting is facilitated by the teacher but run by the chairperson and secretary, both of whom are assisted by their respective ‘vice’.  This meeting runs to the agenda set previously, and minutes are taken by the secretary.  The main purpose of the meeting is to outline the schedule for the coming month, decide on the skills to develop over the month, troubleshoot any issues, and look at timetabling of duties. 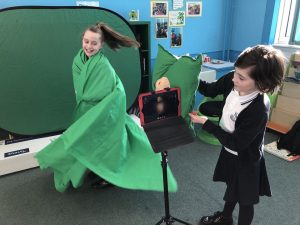 Weekly skills development sessions are always held at a specified lunch time each week and run for 45 minutes.  The children get a 15-minute early lunch so that they can be there as I feel that 30 minutes is too short.  It does however mean that either I take lunch to the meeting or miss it.

There will be times that you aren’t confident in teaching the area/skill that the children want to learn about.  In these cases, I would suggest trying to book a STEM ambassador to come out to work with the group, seeking advice on Twitter/other PLN, or using YouTube tutorials to either teach you or to do the teaching for you.  Remember to document any CPD that you do in this way.

The weekly skills development sessions are, in my opinion, the most powerful aspect of a school Tech Team, as they are the time that you will see the biggest difference in your learners. 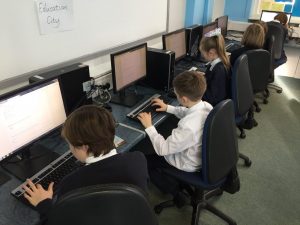 It is important to note that sometimes you will need to dictate a skills development session; however, try to restrict this to a maximum of one per month.  Say, for example, Safer Internet Day is coming up and your team has been asked to present lessons or an assembly, you may need to give up one session to prepare for it.  Do make sure that the preparation is done in one session only, otherwise your Team will be at risk of becoming a teacher-led experience which almost entirely defeats the purpose of it.  In Mosspark Primary School, our Tech Team have a Microsoft Group that uses Teams to communicate.  I upload a skeleton presentation with title pages, for the children to research and put in the information and any media necessary.  The children get control of the design and transitions of the presentation, and even organise who will say what.  By using Microsoft Teams, it enables the children to communicate via the ‘comments’ section, and in real time collaborate on the same document either in the meeting or after at home.  I set the children a deadline by which the presentation is to be finished and am on hand for the initial meeting and at a few other times that the children can use as a drop-in session.  Otherwise, the children are left to work on their own.  On the deadline, I then review the PowerPoint and feed back to the group on the group chat prior to the assembly or lesson.

I have scheduled a blog post in a fortnight for a more in-depth look at setting up teams, but it is well worth looking into activating your members’ Glow Logins as soon as you set up your own Digital Leaders’ team.

The first change I always make when assisting with an ICT program is ridding the school of class logins.  Frankly, they are a waste of time.  With infant classes and even older classes, why waste valuable lesson time logging out of a previous class’ session, sometimes even having to reboot computers and then logging in.  With younger classes it’s frankly absurd, and in the older classes is just a complete waste of time.  In place of class logins, I always switch to a single school login.  In our school, it is the responsibility of the Tech Team to log on to all of the computers in the ICT suite during registration time on their timetabled day (they let their teacher know that they’re in at 9am, and head straight to the ICT suite).  The reason that I like my team to consist of either 10 or 15 members is due to my being a little OCD about the duties timetable.  Having 10 or 15 members in your team means that you always have either 2 or 3 children timetabled on duties per day, and the duties are thus:

I have found that the children do take their duties very seriously, and it has given some of our children a real sense of responsibility. 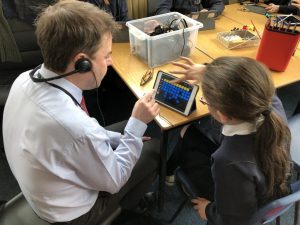 The main reason that digital leader teams are formed though is to help raise attainment in digital learning across the school, and for children to really lead learning.  In my mind, leading learning is not simply ‘presenting’ at an assembly or in a lesson – that’s an EXA outcome.  In our school, leading is taking forward learning.

Each term, our staff work with a GCC ‘Improving our Classrooms’ model of moderation, whereby they receive training in an area of digital learning.  Over the course of the term, they then use that aspect of digital learning (e.g. creating movies with iMovie, or coding with code.org) with their classes to feed back at the end of the term the impact that it has had.  Often though, after only one training session, all staff aren’t always confident to teach a lesson using a program that they’ve only seen once – which is understandable and will be the same in all establishments.  By having the Tech Team, it means that staff are able to request Tech Team support.

The process for this is threefold:

The trickiest thing for this process to work is for staff to come onboard with asking children for support.  I’m very fortunate that my colleagues have been fantastic and have really embraced using Tech Team (even for areas that they are comfortable with, but rather as additional support for the children).  This has had such a positive impact on the team members and their confidence but has also really boosted the profile of the Tech Team, and digital learning, within the school.  However, in talking with colleagues from other establishments, often staff have been reluctant to engage with the tech team in this sense, and so they haven’t been getting used well.  It is important though, in setting up a team of digital leaders, that you do monitor how they are being used and encourage staff to invite them in to support with the use of iPads and computers.

I could write so much more about the digital leader teams, as they have truly transformed the way I view the topic of ‘children leading learning’ and have had such an impact in my current school; however, time is pressing for the publish time!

I’d strongly suggest looking at as many examples of good practice as you can to get ideas and inspiration for setting up your own team.  Check out Mosspark Primary and my own Twitter feed for regular digital literacy posts, but especially follow the #MPTechTeam hashtag to see the type of things that the Mosspark Primary School Tech Team have been doing.

I do hope that you’ve found this post helpful.  Please feel free to tweet me about any ideas/suggestions for future posts, and if you have any comments/questions about this one.

N.b. all images used in this post have been of the 2017-18 Mosspark Tech Team.  You can find the original images and more information using #MPTechTeam on Twitter.