The RED Book Award is Falkirk Council’s Book Award in which each secondary school in the authority participate. RED stands for Read, Enjoy, Debate and is all about reading for enjoyment and stimulating lively debate about books. https://twitter.com/readenjoydebate?lang=en

The award is now in its 12th year. This year’s shortlist is:

Rebel of the Sands by Alwyn Hamilton

Welcome to Nowhere by Elizabeth Laird

13 and 14-year-olds from English classes in Bo’ness Academy, Braes High, Denny High, Falkirk High, Graeme High, Grangemouth High, Larbert High and St. Mungo’s High as well as reading groups in Polmont Young Offenders Institute and from a variety of countries take part. The young people read the 4 shortlisted titles, vote for their favourite book and produce a creative interpretation of one of the books for the award ceremony.

The shortlist of books is decided after lengthy debate by school and public librarians, young people feed in their opinions to the debate too. The criteria include books must be available in paperback, the author is available to attend the award ceremony and the books must have the wow factor.

The young people decide the winning book through a secret vote a few weeks before the award ceremony. The winner is revealed by opening the red envelope at the close of the big day!

April – August: A longlist of books is read from which the shortlist is agreed.

May: The RED Book Award ceremony held at the Falkirk Town Hall FTH

Around 250 young people and invited guests pack into the Falkirk Town Hall to participate in the RED Book Award ceremony. Participants are encouraged to wear a red accessory and there are prizes (sponsored by Bright Red Books, www.brightredpublishing.co.uk) throughout the event for winners of the book review competition (sponsored by Palimpsest, www.palimpsest-bp.co.uk), a book cover design competition and best red accessory. The day is full of energy and fun and packed with a host of activities – from book signings and chatting with the authors to creative interpretations of the books and live entertainment by the young people.

The ceremony culminates in the opening of the red envelope to reveal the winning book.

The Scottish Children’s Book Awards are run by the Scottish Book Trust with support from Creative Scotland. It is voted for entirely by children, with over 38,000 children across Scotland voting last year.

Falkirk Council’s Learning Resource Service is leading an initiative to add value to the Book Award for local nurseries and primary schools, which aims to promote reading for enjoyment and to motivate our children to become lifelong readers.

The Learning Resource Service will provide copies of the shortlisted books and organise a celebration of reading event to showcase the literacy work attended by the shortlisted authors.

This year 19 nurseries and primary schools are taking part and there is a lot of great literacy ideas and work being created.

Here are some great ideas to use with the book, Attack of the Robot Chickens by Alex McCall from Antoinette Irwin, St Joseph’s PS:

Attack of the Robot Chickens Apostrophes

Attack of the Robot Chickens Comprehension

Attack of the Robot Chickens Metalinguistics

Attack of the Robot Chickens 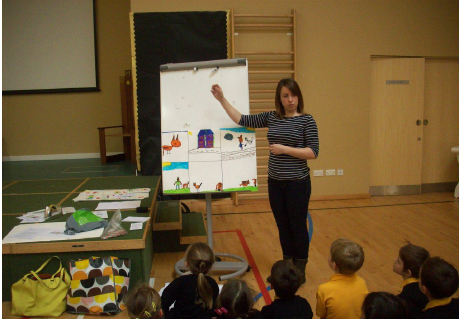 Over the past few months Lesley Haston, class teacher at Maddiston Primary School in Falkirk, has been working closely with her colleague Laura Fowlie on a Mairi Hedderwick-inspired project as part of the Scottish Book Trust Authors Live Teacher Champions Programme.

Lesley and Laura’s P2 pupils were inspired by the Katie Morag series.

They discussed if any of the children had read these books before or seen the new TV programme. They read a different Katie Morag story every week. 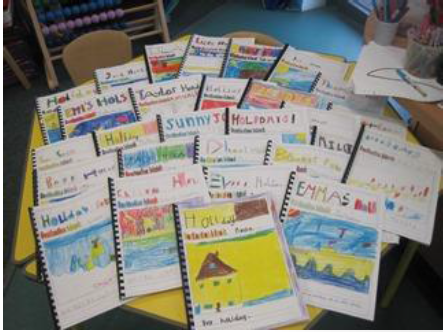 In groups the children wrote about the characters from Katie Morag using adjectives and we displayed these on the wall. They came up with words such as toerag, mischievous, cheeky, old, hardworking, etc

The children had a Scottish themed play afternoon where they had opportunities to choose a variety of different activities. They could build the New Pier out of construction, they curled paper to make Alecina’s sheep’s coat, they wrote down the ingredients for haggis, played in the water with boats and ferries, listened to Scottish music, decorated thistles and created Plasticine Nessies.

They wanted the children to learn more about the production of picture books in preparation for them producing their own. They had a visit from illustrator and print maker Cate James; she explained the picture book making process and took the children through the storyboarding process. The children had a fantastic time and we have been using this idea in our language lessons, they are eager to create their own characters and story books.

Inspired by the island-living theme in the Katie Morag series, the main focus for the project was to produce a piece of extended writing in the form of a travel brochure. The children were split into seven co-operative groups named after a Commonwealth country. They worked together and found out lots of facts and information about their country from the national dress and food to famous landmarks and people. Once they had collated all this information, they used it to write their travel brochure. They had to come up with their own company name, prices and accommodation options on their island. The children worked extremely hard on their brochures and the results were brilliant. Everyone was asked to present their brochure to our Headteacher. Every pupil was awarded a Katie Morag book of their very own for their hard work.

To round off the project we held a ceilidh and invited along their grandparents. It was a massive success and the turnout for it was overwhelming. The children had practiced Scottish songs, poems and highland dances to entertain and involve their special guests. They had fantastic feedback and the children were so pleased at who came to see and hear them. The children also shared their extended writing project with their visitors and it was lovely to hear all the amazing comments.

Alongside all of this, the children were rehearsing for their forthcoming class assembly. They performed to parents and the whole school to tell them what we had been learning. Each child was given a part to play in our assembly such as sportsman, flag bearer, Scottish dancer, Katie Morag characters and narrators. They learned songs and poems to accompany the assembly and supplied costumes to enhance the performance.

Everyone thoroughly enjoyed all of the activities and opportunities that they have been given throughout the project. They have been so enthusiastic and produced some of their best work. The project has also been included in their Enterprise Award accreditation where we are hoping to achieve our Platinum award.