The RED Book Award is Falkirk Council’s Book Award in which each secondary school in the authority participate. RED stands for Read, Enjoy, Debate and is all about reading for enjoyment and stimulating lively debate about books. https://twitter.com/readenjoydebate?lang=en

The award is now in its 12th year. This year’s shortlist is:

Rebel of the Sands by Alwyn Hamilton

Welcome to Nowhere by Elizabeth Laird

13 and 14-year-olds from English classes in Bo’ness Academy, Braes High, Denny High, Falkirk High, Graeme High, Grangemouth High, Larbert High and St. Mungo’s High as well as reading groups in Polmont Young Offenders Institute and from a variety of countries take part. The young people read the 4 shortlisted titles, vote for their favourite book and produce a creative interpretation of one of the books for the award ceremony.

The shortlist of books is decided after lengthy debate by school and public librarians, young people feed in their opinions to the debate too. The criteria include books must be available in paperback, the author is available to attend the award ceremony and the books must have the wow factor.

The young people decide the winning book through a secret vote a few weeks before the award ceremony. The winner is revealed by opening the red envelope at the close of the big day!

April – August: A longlist of books is read from which the shortlist is agreed.

May: The RED Book Award ceremony held at the Falkirk Town Hall FTH

Around 250 young people and invited guests pack into the Falkirk Town Hall to participate in the RED Book Award ceremony. Participants are encouraged to wear a red accessory and there are prizes (sponsored by Bright Red Books, www.brightredpublishing.co.uk) throughout the event for winners of the book review competition (sponsored by Palimpsest, www.palimpsest-bp.co.uk), a book cover design competition and best red accessory. The day is full of energy and fun and packed with a host of activities – from book signings and chatting with the authors to creative interpretations of the books and live entertainment by the young people.

The ceremony culminates in the opening of the red envelope to reveal the winning book. 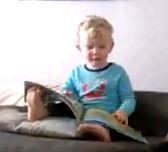