Here is a quote bank to help you out with your essays!

Pip steals a lot of food and brandy for the convict even though he doesn’t really have to. When the convict is caught, Joe’s words show where Pip learned such kindness.

‘Some bread, some rind of cheese, about half a jar of mincemeat… some brandy… a meat bone and a beautiful round compact pork pie’

‘We don’t know what you’ve done but we would not have you starved to death for it, poor miserable fellow-creature – would us Pip?’

Pip is bullied and hurt by Estella on first meeting her, as she thinks he is common.

‘I was so humiliated, hurt, spurned, offended, angry sorry – I cannot hit upon the right name for the smart – God knows what its name was – that tears started from my eyes”

Pip has come into his money, and feels embarrassed by Joe’s ‘course’ actions in London which Pip thinks show Pip up. Joe acknowledges Pip’s humiliation and tells Pip it is because he is out of place.

‘impatient’ ‘out of temper’ with Joe

Pip acknowledges all Magwitch has done for him and realises that Magwitch did not choose this life but was forced into it through poverty, everything Magwitch has done was to pay back the kindness Pip showed him as a child.

‘took my place by Magwitch’s side’ acknowledging the ‘affection, gratitude and generosity’ of Magwitch

As an adult Pip is able to realise he is happy and comfortable. He can be with Estella now he understands how to be a good person.
‘I work pretty hard for a sufficient living and therefore – yes, I do well!’

‘saw no shadow of another parting from her’

On one meeting with Estella, before her engagement to Drummel, Pip gives a grand speech about how he loves her.

‘You have been in every line I have read…. Every prospect I have ever seen’

Pip acknowledges whilst he is spending all his fortune in London that you cannot truly change the person you are supposed to be, no matter how much dressing up you do.

“No varnish can hide the grain of the wood; and that the more varnish you put on, the more the grain will express itself.”

We’re ready for the essays guys! Your favourite part of the course! Remember we are using PEEL to structure our essays.That’s Point, Evidence, Explain and Link Back.

We’ve already taken a look at the questions from the past papers and its clear that we can comfortably answer most of the questions. We probably won’t spend much time on the ‘setting’ based ones purely because we haven’t spent time focusing on this in our discussions during class.

The first question we are going to look at is this:
Choose a novel or short story in which there is a complex character for whom the reader has some sympathy. With reference to appropriate techniques, explain the nature of the complexity and discuss how your response to this character adds to your appreciation of the text as a whole.

We could answer this question by looking at one of three characters: Pip, Miss Havisham or Estella. It makes the most sense to answer it using Pip as he is the narrator and protagonist of the story. If you have a think about Pip’s character, he isn’t always the greatest person despite being in a secure environment. At times he is actually downright unlikeable. We will take him as our character for this essay.

To plan out this essay then we first of all need to think of 5 points from the book that show us Pip is a complex character. There are a lot of points that you could make. Here’s the 5 points we have:

Pip helps the convict out of fear but also kindness
Pip discovers that life could be different if you are wealthy as he is introduced to Miss Havisham and her world
Pip is unkind to Joe and embarrassed by him he starts to live his life in London
Pip looks after Magwitch and turns his life around
Pip fully changes his character for the better by understanding a good work ethic and being morally good.

If these are our 5 points we need to get evidence from the text that supports this. Your first job is to work out what quotes from the text we will use to back up these 5 points. Once you’ve got your quotes we’re ready to start writing!

(Click on the images below to make them bigger.) 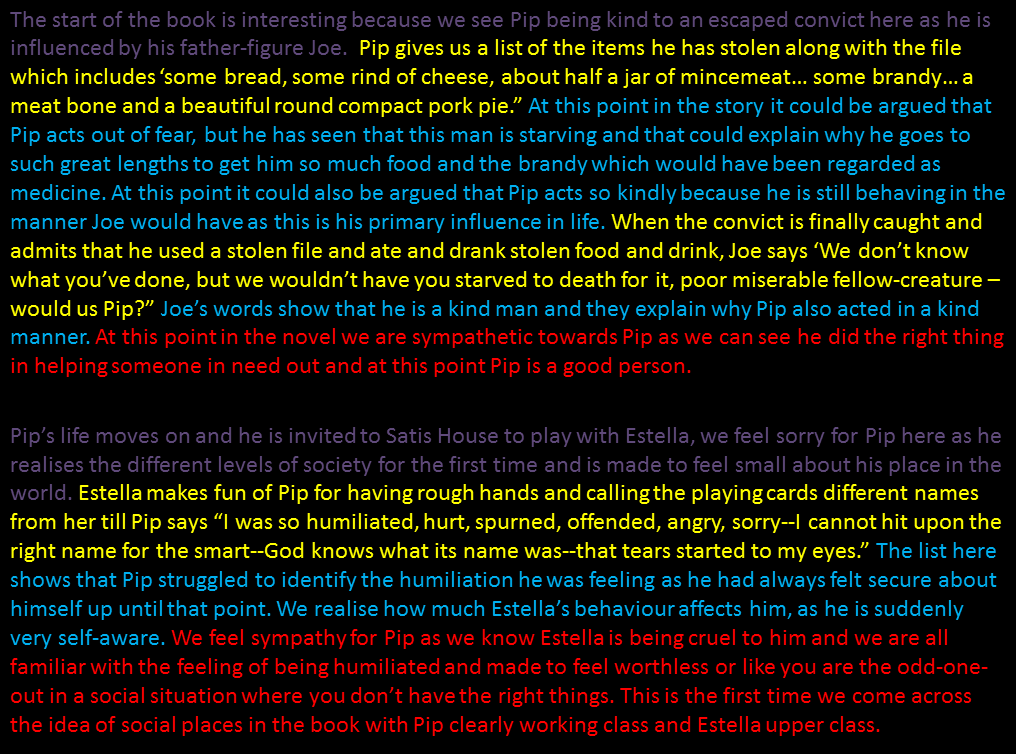 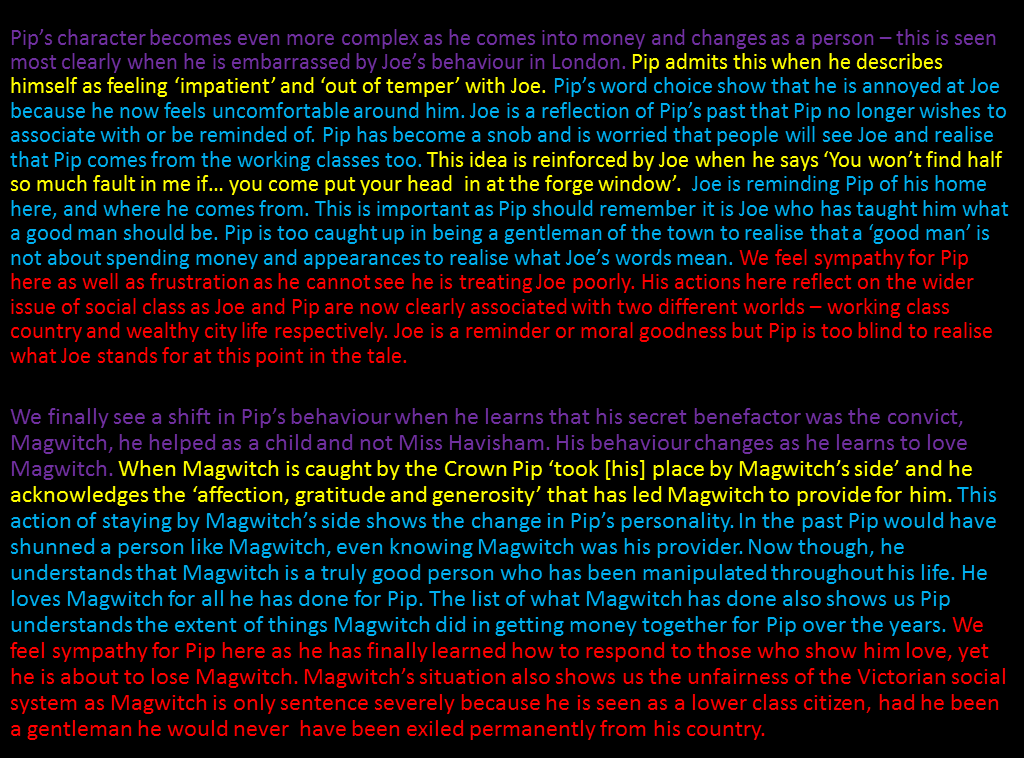 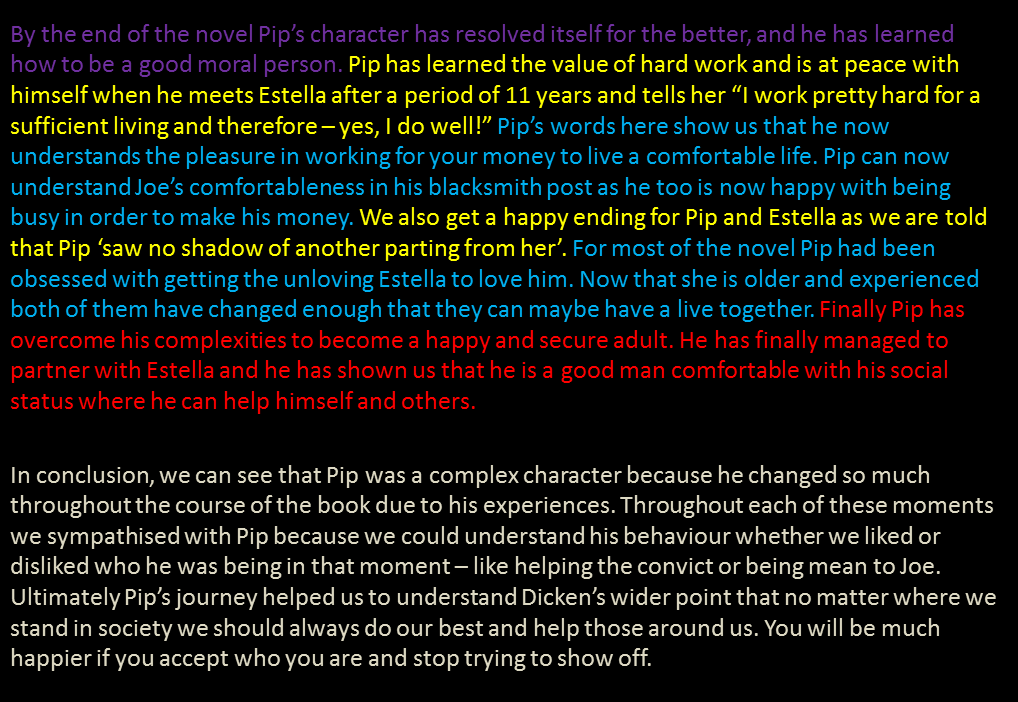