We are very excited to announce that Melissa Fraser (P.5) is a runner up in the 2021 Christmas Card Competition which was set by The Rt. Hon. Alister Jack MP who is our Member of Parliament for Dumfries and Galloway. It must have been a very difficult job for Alister Jack’s team to judge all the entries. All the children who entered this competition received a certificate to thank them for their participation. Melissa received her certificate and a £25 gift voucher for Amazon.
Well done to Melissa and everyone who entered. 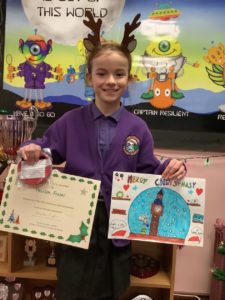