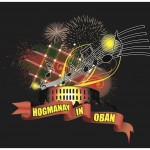 Oban High School Traditional School of Music and Amy Boyce (S5) were successful at the Opportunity Knocks Oban Live Auditions on Saturday to win a place on the big stage at the Oban Hogmanay Street Party.  There were 10 acts which were then whittled down to four and those four acts performed once more for the judges who chose our two Oban High School acts.  Amy is a singing pupil of Jean Gillies, local singing teacher and the Musical Director of the Traditional School of Music is Sileas Sinclair. This marks another great accomplishment for this talented group of young people at Oban High.