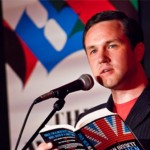 Scots author Alan Bissett visited most of our secondary schools recently, delivering readings and hosting workshops.
The author of Boyracers, Pack Men, Death of a Ladies’ Man and The Incredible Adam Spark, who was brought up in Falkirk, spoke to S3-S6 pupils about what had inspired him to write his books. Alan, born in 1975, had his first novel published in 2001, and has also written two solo plays, a one-woman show and a short documentary, as well as numerous projects in collaboration with other artists.
He makes regular appearances in schools across Scotland, and has performed at prestigious international festivals in New York, Toronto, the Hague, Melbourne, Bejing, Zagreb and Kikinda (Serbia). The tour was co-funded by Scottish Book Trust LLF fund.
“We had a fantastic time with Alan – he did a workshop with S4, and got them thinking about opening lines and hooking the reader’s attention.  They loved him and it was great to be able to get them writing creatively.”
Librarian, Tobermory High. 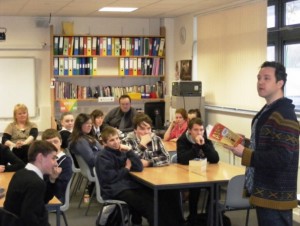