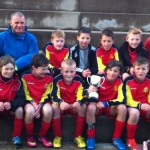 On Monday 13th May the annual Christian Aid football tournament took place at Hermitage Academy. Schools from Helensburgh and the local area took place in, what was to be, a very wet football tournament. The Hermitage football team were competing for the first time since the National Finals in which they managed to come 3rd in the whole of Scotland. Their first game was against Cardross which Hermitage won 3-1. They followed this with another two impressive results against Lomond and JLB winning 5-0 and 7-0.
In the semi-finals Hermitage faced Colgrain and lost a goal early in the match. They regrouped and bounced back winning the game 5-1. In the final, Hermitage played Rhu for the trophy. The game was a well fought contest which saw Hermitage win 5-0. Well done Hermitage, another great display! Player of the tournament was awarded to Niyah Joseph from Hermitage.