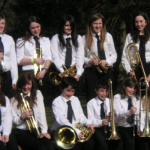 On the 24th of March Argyll brass travelled to the Robert burns museum in Alloway to take part in the Brass @ the Bards competition. Although some people couldn’t make it to the competition because of the bad weather, everyone still played fantastically and the band achieved a Gold Award! The competition was fun to take part in and a good chance to show what the band was able to do. The gold award showed that everyone’s hard work and effort paid off.