On Sunday 14th October Port Ellen Primary Gaelic Choir excitedly began their journey to Dunoon to compete in this years National Mod. The children had an early start on Monday morning with many competing as individuals before the choir competitions in the afternoon. All of the children had worked extremely hard to prepare for their competitions and we were delighted to learn that so many of our individual competitors had been successful in their categories.

In the recitation of prescribed poetry competition for 9 – 10 year olds Maisie Logan was awarded first place, Abbie Morris was second and Elizabeth MacMillan was third. In the 11 – 12 years poetry competition, Ruby Miller came second and Aileas Colthart was third. Elizabeth MacMillan was awarded second place for solo singing in the 9 – 10 years category. Ellen Johnston and Emily Logan came third in the duet competition for under 13s.

Congratulations to all of our winners and a big well done to all of the children who took part in individual competitions.

At one o’clock the choir came together looking smart in their red polo shirts for a final practise before their competitions. Their first competition was the two part which took place in the Queens Hall. The children sang beautifully and were awarded first place and The Caledonian MacBrayne Trophy. The choir then had to quickly get to St Johns Church to take part in the Unison competition. Again the children sang their hearts out and were placed first and awarded The Badenoch and Strathspey Area Committee Trophy. Their final competition was the Puirt-a-beul and the children were delighted to learn that again they had been awarded first place, this time receiving The Olive Campbell Trophy and The Macintyre Cup. All the children returned home to Islay on Tuesday night and were given a fantastic welcome home as they were piped off the ferry to meet a cheering crowd.

Many congratulations to all of the children in the choir and to Mrs Macdonald, their conductor. A huge thank you must also be given to Mrs Dennis, Mrs J Macdonald and Mrs MacTaggart for all their help in preparing for the mod and to all the parents who came along and helped on our trip.

We are all looking forward to the mod in Paisley next year already. 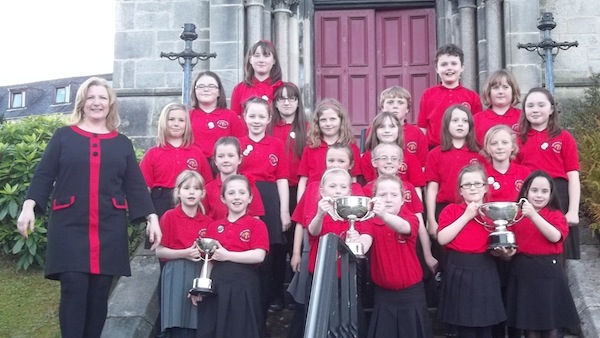