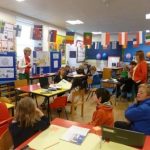 “On Monday, 26th September, Tayvallich Primary School was full of bright colours and laughter. It was European Language Day and each child and staff-member was dressed from head-to-toe in the bright colours of a chosen European flag. We all said which country we represented and some even had found out the Capital city of their country! The classroom was decorated with the colourful flags of Europe; balloons with Spanish colour words; and information boards with a variety of different language posters.”

The whole school gathered first to learn what EDL is about then watched and listened to songs and rhymes from some European countries. 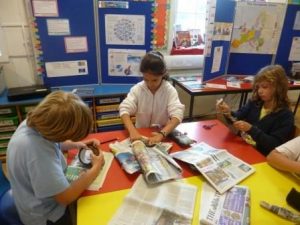 P1-3 made their own flags and read about the stories behind some flags. They listened to the story Je m’habille …et jet e croque! by Benedicte Guettier and had lots of fun painting their version of the clothes and retelling the story.

P4 used the SCILT website to match the different countries to the Talk to Me stickers.
P6-7 worked in groups to investigate a country of their choice: facts, numbers to ten, greetings. They created an information poster to share their work.

Famous European artists were studied with the class teacher and pupils painted their own Colour Wheels annotated in their chosen European language.

P4-7 were challenged to build the Eiffel Tower out of newspaper… in 10 minutes! Most of them could stand unsupported!

The P.E. teacher participated by using French commands and phrases during the class lessons. “I loved doing P.E. in French! French skipping.”

“It was a fun-packed day and everyone enjoyed it! We all liked the Talk to Me bangles.”

Later in the week, a parent who speaks Italian visited the P1-3 pupils and taught them words and songs in Italian.