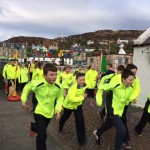 On the Tuesday, Primary 7/6 organised a ‘Run & Row to Rio’ day to get the whole school involved in their Run to Rio challenge. The day started with the P7/6s running the ‘Tarbert Mile’ along the harbour side. The rest of the primary pupils, plus parents, buggies and friends, then joined in to walk the mile again. A great turnout saw around 140 people take part.

For the rest of the day, running and rowing machines were set up in the school for pupils, staff and the community to challenge themselves to run or row for 10 minutes. A very competitive spirit was in evidence with all trying to outdo their friends! Overall best runner was PC Jack Muir (2.27 km) followed closely by Craig Smith (2.12 km). Overall best rower was Owen Allen (2.467km). The total distance travelled over the day was 410.4km to put us at over 6000km so far, well on our way to Rio!

On Friday, S4 pupils organised a ‘Dress in Red’ fundraiser. They had also been busy baking and sold delicious cakes at break times. Special mention to Charlie Monks who put in a huge amount of effort to make this such a success.

S1 and S2 also took part by holding a sponsored walk to the White Shore. The overall total from all of these events was approximately £350.