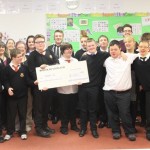 On the 16th of December 2015 Dunoon Grammar school Learning support department held its annual Christmas fayre. At the fayre there were lots of different stalls such as tombola, raffle, baking, homemade decoration, wood crafts and Guess the weight of the Christmas cake. For the first time ever there was a Santa’s Grotto and Kirn Primary Nursery children enjoyed meeting Santa and getting a small present.

The fayre was run and organized by learning support pupils who took on different roles – from manning the stalls to running the tea room to selling raffle tickets to helping Santa. Pupils also laid on some entertainment singing festive songs, telling silly jokes and performing music. Ms. Welsh Principal Teacher of Support said, “This year was our biggest and best Christmas Fayre yet. It was fantastic to see our pupils involved in such a variety of meaningful activities from which they all learned so much.”

A grand total of £712.00 was raised. Most of the money will go towards resources for the department but some of the money raised has been donated to UNICEF. This charity was chosen because pupils wanted to help children affected by war in Syria and who no longer have homes. This money will buy them winter clothes to help keep them warm whilst they find new, safe places to live.