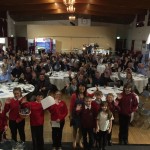 As part of their Food for Thought project, funded by Education Scotland, Strone Primary School took five P5-7 pupils, Mackenzie, Romily, Millie, Duncan and Theo to the Taste for Tourism Conference in Oban last week. Two other Argyll schools, Ulva Primary and Ardrishaig were also presenting work at the event. Strone pupils organised their own stall, with a presentation of their work about local produce, and took baskets of delicious Apple and Bramble flapjacks they had made, to sell at the event.

They had been supported by Glenfinart Walled Garden who had provided the apples for their flapjacks. The children made a short speech on stage about their project, and spoke to lots of people in the food and tourism industry who came to their stall and purchased flapjacks. The delegates were very impressed by the quality of the snacks and the work that had gone into the packaging, which had been designed by the children themselves. In fact, before the end of the day, the flapjacks had sold out, and they made £80.00 profit! It was a great experience for all involved.