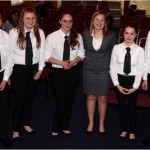 They now have qualified for the Besson Solo and Ensemble Championships in February.