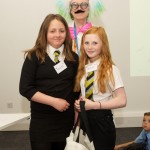 Pupils from Dunoon Primary School were invited to the reallysmallscience on tour celebration event, at the University of Strathclyde, on the 17th of June. Primary 7 pupils, Siobhan Simpson and Leagha Campbell lifted the trophy for the best 3D entry for the ‘science in everyday life’ image competition. P7 pupil, Lucia Westwood-Phillips also received a medal for her drawing entry to the competition. 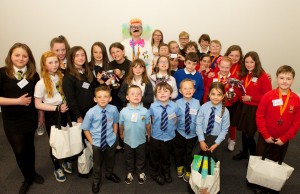 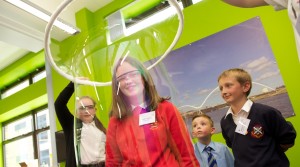 Over 40 pupils and 10 teachers and parents attended the event, which kicked off in the morning with some fun hands-on activities, before takeaway pizza being delivered for lunch. The afternoon session saw pupils from different schools compete for prizes in the reallysmallscience image competition.

The reallysmallscience group, based in the Chemical and Process Engineering (CPE) Department, embarked on a project, to tour primary schools in and around Glasgow, spanning the country from Argyll & Bute through to Falkirk. The group aim to inspire and enthuse younger generations about science and engineering, through fun and interactive workshops, based around real research, which are delivered by real researchers.

Joy Leckie, group coordinator, said: “The event was a great opportunity for the pupils to experience and visit a University first hand and find out more about the important research that is being undertaken here in the Chemical Engineering Department.”
On the day, pupils from the Gowdie Club, St. Marnock’s, Antonine, Dunoon and Holy Family Primary Schools, lifted trophies for their creative entries to the competition. In addition all pupils received certificates of achievement. Prizes were awarded by a very special guest: Professor Nano, who took some time from his busy schedule to attend the event.

“The images and videos created by the pupils were outstanding, and it made our job extremely difficult when we had to choose the winners. I particularly liked the three-dimensional entries of everyday science at home and those that were inspired by nature” said Joy.

During the event, there were four interactive, hands-on activities for the children (and adults) to take part in, including: nanodirt, nanomove, nanodraw and the bubble lab.
The ‘on tour’ project, which was supported by the Royal Society of Chemistry, ran from February through to June. During this time, the group visited seven primary schools, one early education centre and an after school club, engaging with around 700 pupils in total.