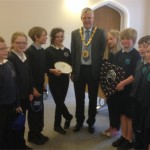 On Tuesday the 12th of May Tayvallich and Ardrishaig competed in the final of the resurrected Mid-Argyll inter-school quiz. After a hard fought final Tayvallich emerged the winner. It was a very exciting final and the teams were only a point apart before the final round. Congratulations and well done to both teams for their hard work. The final was held in Kilmory Chambers and vice-provost, Dougie Philand, presented the shield to the winners and the salver to the runners-up.

The quiz was organised by pupils from the Mid-Argyll pupil council. Two representatives from each school have met four times since November and they worked out the format for the quiz and the rules. The draw was made in February and since then the area schools have played each other until we were left with the final two. It was a lovely way for the children to visit other schools.