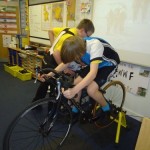 Primary 6 pupils at Rhu took on a mighty challenge as they cycled their way around France, without even leaving the comfort of the classroom.
While Tour de France riders battle it out in the mountains for the much-coveted maillot jaune, the pedal-powered pupils each took a spin on a road bike, firmly secured to a turbo trainer, while scenes from last year’s race played on the whiteboard to bring the atmosphere to life. With a cycle computer attached to the rear wheel, the keen class were able to see how far they had travelled and how fast they were pedalling. 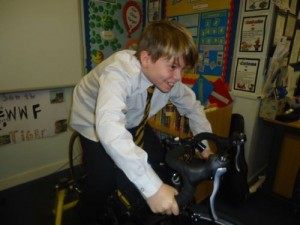 Inspired by the speedy efforts of Bradley Wiggins who averaged 38.4 miles per hour, the cyclists, worked hard to meet his record-breaking time trial. They finally covered just under 15-miles after they had all taken a 5-minute spin on the bike.
It was all part of the Primary 6 Europe topic, in which pupils are taking a journey of discovery around a variety of European countries. Learning about many aspects of these diverse countries, including: language, culture, sport, food and geography. 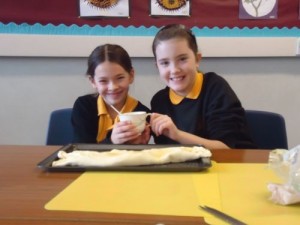 Children also enjoyed a food-sampling day where they turned the classroom into a kitchen and prepared a banquet of sampling plates from a variety of countries. Fresh basil pesto tossed pasta from Italy; tzatziki and houmous from Greece and apple strudel from Austria, were just some of the many dishes sampled that day. The smell of garlic lingered in the classroom for several days!

2 thoughts on “Tackling the Tour”