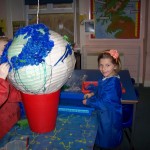 Following on from the successful end of term BBQ in which the pupils wanted to taste different exotic types of animals, which became known to the children as “Eating Round the Zoo”, Kilchrenan celebrated the end of the term by Eating Round the Christmas World. 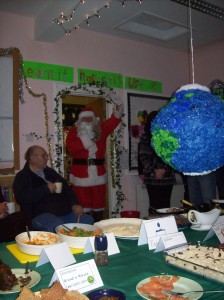 The local community, friends and families, were invited to join in tasting Christmas food from various places: Jamaica, Malawi, Germany, India, Australia, South Africa Sweden and many more. Friends & families brought some wonderful plates of food to share, and the pupils were responsible for cooking turkey, stuffing, bread pudding, pigs in blankets, gravy, roast carrots and parsnips and roast potatoes. They created a large world from an old Ikea lampshade as a hanging centrepiece for the meal.

It must have smelt nice, as we even had a surprise contribution from the North Pole.