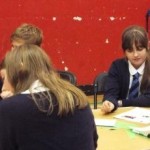 S1/2 spent the day considering the topic of”Rich World, Poor World” in their latest RME conference. Over the morning they looked at some of the issues facing those in the world today. They started by dividing the world’s wealth between them (some had a lot more than others) and considered some of the factors which determine whether or not you have enough to eat. The group explored human rights and made a quilt to illustrate them . Paper chains were created to show what barriers there are for some and how these could be broken.
Many charities try to help to break these barriers and the class shared their research into various charities before coming up with their own appeal for a pretend charity. In the afternoon there was a choice of 3 workshops – one group held a mock enquiry as to where a football team should buy its balls from (would it make a difference if child labour was used?) The differences in a day in the life of those in the developing and developing world was told through Drama and lastly a group used Dance to show our human rights. As the day was about giving and sharing and how we treat one another as humans the class performed random acts of kindness for each other and used these to grow the Grinch’s heart! 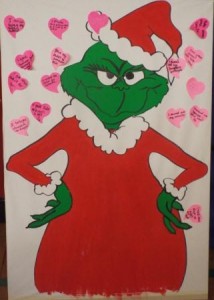