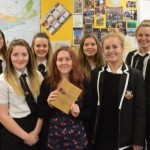 Pupils and staff at Dunoon Grammar School are celebrating the news that Gaelic teacher, Laura Howitt has scooped this year’s Daily Record Scottish Gaelic Awards for Innovation in Education. Now in its second year, the Daily Record Scottish Gaelic awards, sponsored by Bord Na Gaidhlig, was held at the Radisson Blu Hotel, Glasgow on Wednesday, 19 November. The event is a celebration of Gaelic culture in Scotland.
After being nominated anonymously by one of her pupils at Dunoon Grammar School, Mrs Howitt attended the glitzy award ceremony on Wednesday night, complete with a full sit-down meal as well as entertainment from the up and coming Tiree ceilidh band Trail West.
Mrs Howitt did not rate her chances on the night as she was up against two other organisations – eStoras and Gaelic4Parents – who were also nominated for the award.
In the end it was a case of David versus Goliath as Mrs Howitt pulled through to win the award for Innovation in Education despite the tough competition from the other nominees.
Laura Howitt commented:
“It was a real surprise to hear my name being called out as the winner of the Innovation in Education award – particularly considering the quality of the other two nominees. I am really grateful to the pupil who nominated me for this award and for the organisers and judges for selecting me as this year’s winner.”
David Mitchell, Head Teacher added:
“We are really proud of Laura’s achievements and delighted that she was considered for this respected national award. Laura has brought learning alive for her pupils and she is greatly respected by her colleagues and her pupils. Well done Laura!”