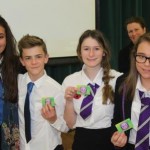 On Wednesday 29th October a group of pupils from the S3 Numeracy project attended a Challenge Day at Clydeview Academy. The pupils spent the day working in teams, made up of both schools, trying to solve logic puzzles and problem solving questions. Pupils from both schools worked very hard to be part of the winning team but with only two unsolved puzzles and more than half of the problem solving puzzles correct the winning team included Briege Liddell and Evan Meyer-McDonagh from DGS. Each member of the team received an iTunes voucher for their effort. It was a very successful day and we hope to host the Clydeview Academy pupils in the future.