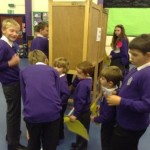 After long hard-fought election campaigns and a lot of research, interdisciplinary learning and even a visit to the Scottish Parliament building in Edinburgh, the polls opened for the pupils and staff at St. Mun’s to vote for the new head boy and girl and their deputies and representatives for each class for the pupil council.
During the campaigns the candidates worked with their campaign managers and party members to speak to and canvas the electorate in the playground, produce their manifestos and present their election speeches to the voters.

Each class also got the chance to vote for 2 people who would represent them on the pupil council ensuring that everyone’s voice is heard and giving the children a say in the running of their school.

Mrs. Fisher was asked to be the returning officer and with the results of the elections kept a closely guarded secret, the children filed into the Hall for a special Assembly.

Taking up the mantle of Head Boy and Girl were Paul McLeod and Iona Sergeant, with Dominic Rafferty and Emma Cooper as their Deputies.

Congratulations goes to all the candidates, who fought a closely run election and we all look forward to working with Paul, Iona, Dominic and Emma who we are sure will be great ambassadors for the school. 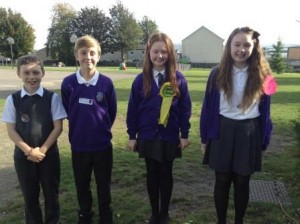