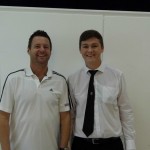 Former SPL Star Visits DGS
It’s not every day that DGS pupils can boast of being part of a football training session with a national cup winning manager – but that is exactly what happened last week, when Dylan Kerr visited the school.

He has now taken his first steps into management – as manager of club side Hai Phong who are in the top division in the Vietnamese league. Dylan recently led Hai Phong to glory in the Vietnamese National Cup, the club’s first success in the country’s premier cup competition for 19 years!

Dylan was back in Dunoon for the first time in 5 years after previously working for Argyll & Bute Council.
Dylan spent the day at the school speaking to pupils and doing several training sessions with fellow football enthusiasts. He spoke to the pupils about his life and his success and how he dealt with knock-backs and criticism. He did a very motivational presentation where he advised pupils not to let anyone tell them they’re not good enough and to always believe in themselves and keep trying – no matter that their goal is.
He also shared his views on the toughest opponents he encountered during his career, including Paulo Di Canio, Brian Laudrup and Alan Shearer.

Dylan had a great reaction from the pupils and was a great role model for everyone.
Dylan commented:
“It was an honour to be here today and I wish to thank all pupils and staff for the warm welcome. The pupils were great. Very enthusiastic and receptive – it was a pleasure to work with them.”

Head Teacher Mr Mitchell added:
“I would like to thank Dylan for taking time out of his busy schedule to visit us today. The experiences and skills he shared with our pupils were well received and we all wish him well with his future managerial career.” 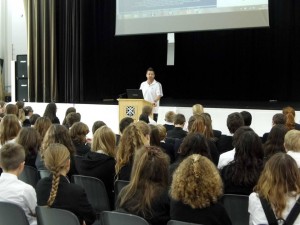 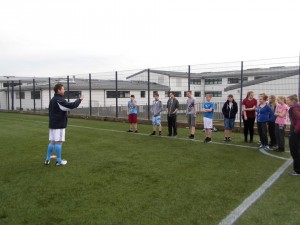 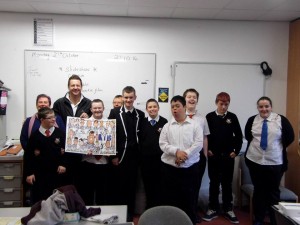 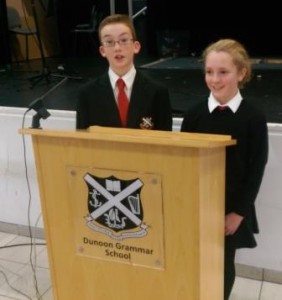 On Wednesday, 22 October 2014, Dunoon Grammar School held an open evening for primary seven pupils and their parents to hear Mr Mitchell, Miss Currie and some new DGS first year pupils talk about the transition from life in primary school to life in DGS.

Mr Mitchell shared his proposals for the 2015-16 term and Miss Currie talked about the transition week and Benmore weekend that P7 pupils will take part in before the summer holidays.

Also presenting information to the audience on the night were S1 DGS pupils – Anna Monahan, Ryan Currie, Abby Stone and Alan Mollins – who gave a pupils perspective on making the change from primary school to secondary education.

Tea and coffee was served by the excellent DGS canteen staff and overall the night was a great success!

Primary 7 pupil Aiden Purdie, who was part of the audience commented:
“Hearing the first years speaking about their experience and move to DGS really helped. I’m now really looking forward to coming up to the grammar!”

Head Teacher Mr Mitchell added:
“I was delighted with the turnout from P7 pupils and their parents. This information evening is part of an extensive programme of events and experiences to ensure pupils make a smooth and successful transition to life in DGS. We look forward to working with our partner primary schools throughout the year to ensure our new intake are prepared to progress with their education in Dunoon Grammar School.” 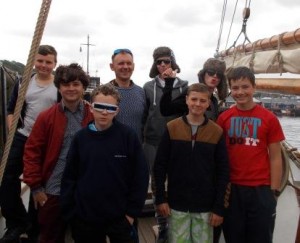 Sailing on a 100ft Brixton trawler, our courageous crew – supported by DGS teachers Mr McCready and Miss Currie – cast sails from Oban on a trip which took in many superb destinations including Tobermory, Eigg and Coll.

At night the DGS explorers lowered the anchor and each member took two hour shifts at manning the ships computers throughout the night – looking at the depth, weather and the current. It was not all hard work thought as the crew prepared meals and sang sea shanties including “Blow the Man Down” and “Randy Dandy”.

The trip was offered to DGS pupils by the Trinity Sailing Foundation – a registered charity dedicated to assisting the personal development of young people through offshore sail training.

“There were many memorable highlights from the trip – particularly sailing down Loch Sunart and going for a dip in the sea. I have also greatly improved my sailing skills and my knots. I would definitely recommend it for anyone offered the chance to be part of the expedition next year!”

“I would like to thank the Trinity Sailing Foundation for once again offering this fantastic personal development opportunity to our pupils. I would also like to thank the staff and pupils involved in this voyage. It was clear that all involved had a fantastic and fruitful experience.” 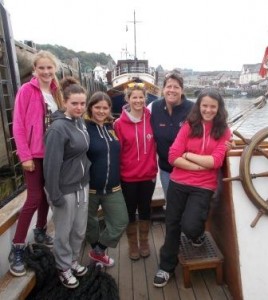 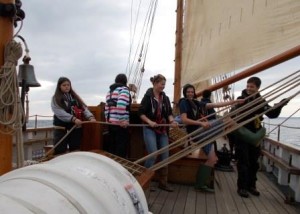 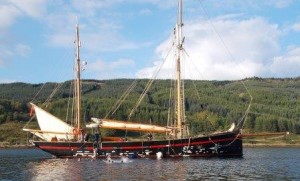