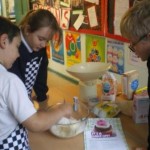 The children of Skipness Primary School had a wonderful time on Thursday 25th September. They spent the morning preparing delicious cupcakes with green icing which were to be sold in the afternoon to their many visitors. The school also received many delicious delights from the parents and residents of Skipness. Even though it was a drizzly day, this did not prevent people from joining the children for their “wee cup of tea”.

The children were delighted to meet some new people who were on holiday in Skipness and wanted to join in. Some of these were French and which enabled the children to practise their conversational skills! As well as having lots of fun £196.60 was raised for Macmillan Cancer. An excellent feat for a school with 3 pupils.
Thank you to everyone who joined us for this and those who kindly sent in donations! 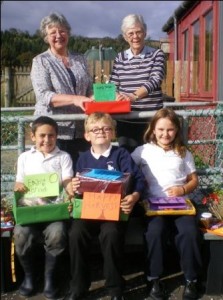 The children of Skipness Primary School have prepared Harvest Boxes which will be given out at a special Harvest Thanksgiving Celebration on Sunday 28th of September. The children along with former Head Teacher Gwyn Abernethy and Class Teacher Karen Elkin prepared the special boxes and wrote cards for the recipients. 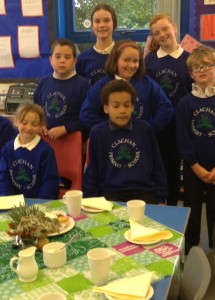 On Thursday 25th September Clachan Primary School held their annual Macmillan Coffee Afternoon. There was a hive of activity as the children, parents and staff all prepared scrumptious cakes for this. A total of £175 was raised.