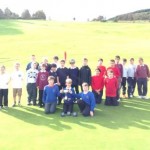 The Ryder Cup wasn’t the only closely contested golf match this week, as twenty three pupils from some of the smaller Cowal Primary schools took part in their very own golf challenge at Blairmore and Strone Golf Course. As part of Strone Primary’s Health Week, they hosted a golf festival for teams of players from; Innellan, Toward, Tighnabruaich, Strone, Strachur and Sandbank Primaries, in conjunction with Blairmore and Strone Golf Club and Active Schools.

On the last day of September, the weather was kind to the golfers and the rain held off while each team worked through putting, chipping and driving challenges with some impressive skills on display. With differing levels of experience, the teams showed admirable sportsmanship with the more experienced players providing coaching tips for the newcomers to the sport.

At the close of the match it was team Tighnabruaich who took home the trophy kindly donated by the golf club, followed by Toward in second place and Strone taking the third position. Thanks go to Blairmore and Strone Golf Club, in particular Greens Convenor Frank Glover for preparing the course which was in excellent condition and Lorraine Daw, ASN assistant from Strone Primary School for all her hard work organising the competition.