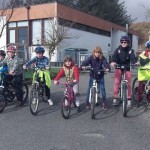 In the Easter holidays almost all the children from Small Isles Primary on Jura took part in a sponsored cycle ride from Craighouse to Lagg. It’s a seven and a half mile cycle with some challenging hills, and everyone managed to do it, even our Primary One person. It took two hours for everyone to get there.

It was organised by two of the older children in school who came up with the idea, and designed and printed off the sponsor forms, as well as carrying out a survey of the other children to see which organisation they wanted to be the beneficiary. At the moment, they have raised over £120 to go to the RNLI but there is still more money to be collected. Well done everyone and thanks to the support team!