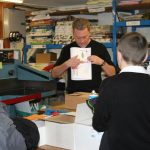 Five pupils from Dunoon Grammar’s learning centre designed an eye-catching range of Christmas cards as part of their contribution to the Learning Support Department’s annual Christmas Fayre. The designs were so colourful and original that learning centre teacher Liz Miller approached local printer, E&R Inglis, to see if they would print the cards to give them the professional finish they deserved.

E&R Inglis not only offered to print the cards free of charge but also invited the 5 designers to come down to their premises and see the printing process in practise.

It was with great excitement that the pupils were able to watch the process from beginning to end – from sending the scanned image on the computer to the printer, to collecting the printed cards, to cutting them and then folding them ready for sale. The pupils were then taken on a further tour of the printing rooms where thousands of copies of our local paper are produced every week. Megan Stewart, S1 pupil and Christmas card designer said, “It was fun and interesting because there were all different machines that I have never seen before.”

The learning centre pupils and staff would like to extend their gratitude to E&R Inglis, not just for the free printing which was very gratefully received, but also for Eliot Peterson giving up his time to give them such an interesting tour and the rest of the staff for making them feel so welcome.