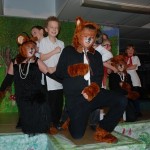 When a crime wave hit the Nursery Rhinns, there was a caseload of mysteries to be solved! Who stole Ma Hubbard’s recipe book? Who kidnapped Marigold the cow? Who nicked a peck of pickled peppers? And what dirty secret was Papa Bear hiding behind his Porridge empire? It was down to Private Detective Jack Spratt to uncover the terrifying truth in this tale of mystery, mayhem and breakfast cereal!


Jack, Goldie Lox and a cast of crazy characters including barmy billy goats, loopy lumberjacks and a potty police squad with a zany Chief Inspector sang and danced their way through this hilarious musical comedy. Porridge had all the ingredients of a delicious production – packed with spoonfuls of sparkling songs and bowlfuls of belly-laughs; this super show left the Rhinns community wanting seconds and shouting for more!