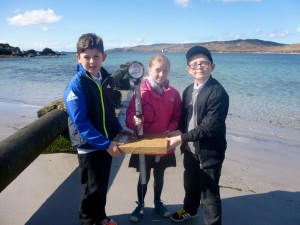 A few weeks ago p5/6/7 worked on designs for a wave power device for the Junior Saltire Awards, which is a national competition for school children to design and make their own devices to promote the use of renewable energy. The group that built the device was called Wave Islay, and included Bronagh, Joe, Murray, Kaya, Abi and Ellie. We researched renewable and non renewable energy and learned about wave powered devices.  Bronagh’s dad came in to help us build our device. When it was finished we went to test it in the sea and it worked. We had to fill in some papers to send away. Later on we found out that our device was in the finals. Now we are working on improvements to make it better! Bronagh, Joe, Murray and Kaya get to go to Edinburgh for the awards on the 9th June, where we will test our device in the Flo Wave facility at Edinburgh University.  It is all very exciting!