On Saturday 14th Santa and his Reindeer came to Bowmore and there were 4 big Reindeer and 2 small Reindeer!  There was a big parade where the Band played and Santa and the Reindeer followed behind. Everyone enjoyed seeing it and afterwards they went to Islay High School where there was their Christmas Fair which also had a mini Ice rink. IT WAS GREAT FUN!!! (but it was VERY cold!) 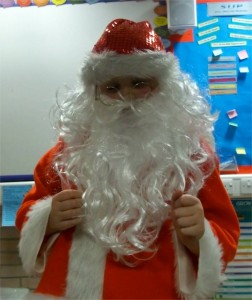 On Thursday the 12th of December Port Ellen Primary School is doing a Pantomime.  It’s called When Sasha Got Swept Up The Chimney.  It is a fabulous play about 4 little orphans called Milly, Sasha, Will, Harriet, they live in Stoneheart Orphanage. Then Santa comes along and saves the day with Milly’s wish, which was that at then end of the Mistletoe Ball the orphans are in for a treat when there new parents arrive at the mistletoe ball to collect them. But there is only 3 tickets there isn’t one for Sasha all the orphans think it’s a mistake. But it’s not because Santa and Mrs clause decided Sasha was going to be there child for the rest of her live.  At the end they all got parents but Sasha got a very special mum and dad.

P6/7 are the main people that are in the pantomime. 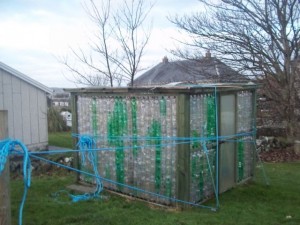 On Thursday the 5th December it was very windy day and power was off so there was no school. When we went back to school on Friday the green house roof had blown in and the supports had snapped.  Mr Gairns had to tie the roof down with blue rope.  Now there is posts up around to keep the pupils away.

By Jodie and Emma 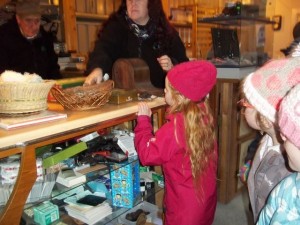 Yesterday we all got into school and Mr Gairns went to Bowmore to get the minibus.  We got our coats on and gloves and hats.  On the way over to Bowmore me and Abbie smelled a fishy smell.  It was because the lorry in front of us was the bin lorry on the way to the dump.  Mr MacIntyre came to talk about working at the dump and gave us lots of interesting facts.  We got a tour of the dump.  There is an old landfill site called Teletubby hill.  Then we went to Rejig to get some things to upcycle.  We got bags, dresses, ties and wool kindly donated by Ina. It was fun!