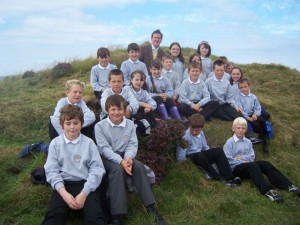 Major General Alexander McDougall was one of the most important men involved in the American War of Independence. At Portantruan where he was born, a cairn to him was unveiled last Thursday, 1st September. This young boy, born on Islay in 1732, grew up to be a truly great man.
We went to Portantruan in a minibus and then we climbed a small hill to get to the cairn. It was overlooking the Major General’s place of birth. Lord George Robertson, people from the Bank of New York, Mr Oglivary and Mr Reavey from the Museum of Islay Life were there along with some invited guests. Lord Robertson gave a speech and then we left. The others went to have lunch.
The Major General was born in 1732 at Portantruan. His family left Islay to go to America when he was only 6 years old. When he was 14 he became a merchant seaman and then a privateer. The British put him in prison for five months because he thought that America should not be ruled by the British. After the war, he became the first President of the New York Bank. He died when he was only 53. His last act was to be carried on a stretcher to vote against paper money.
I was very honoured to have been invited to the unveiling and I thought that it was very interesting what Major General Alexander McDougall did. It proves to me that if you work really hard you can do anything you want. I wonder what he could have achieved if he had lived longer?
By Elinor Baker (P6) 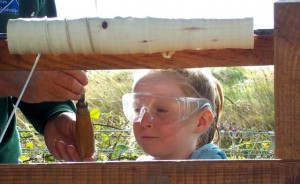 Today we were visited by port Charlotte and Keills school because we were having a visit from Kilmartin Museum.  We were doing woodworking, viking food, weaving and spinning, runes on clay and Viking music.  We were were chopping wood with an axe and turning wood with a pole lathe, and I liked making the wood round on the lathe.  I learned that Vikings used some horns for blowing to make music and had a spinning bone that made music. 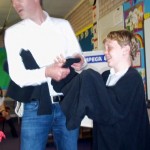 Allan Burnett was at Port Ellen primary school and he was talking to us about his history books.  These are some of his books Columba,  Wiliam Wallace, Mary Queen of Scots, Bonnie Prince Charlie,  Rob Roy,  Robert Burns,  Robert the Bruce and Invented in Scotland.  Oliver dressed up as Columba and looked like Darth Vada.  It was great fun!

We have been learning about the vikings. We found out our viking names, my one was Robstaf the Wise. The vikings were great sailors.  The Vikings came from Denmark, Sweden and Norway and they made their clothes from wool and leather fron animals.  They also washed their clothes in cow pee!

Hope everyone has had a great holiday and is settling down to the new term in school. We have already hosted the Islay book festival, where we were visited by author Ruth Rendell! We also enjoyed some interesting talks by children’s authors Allan Burnett, John Fardell and Cathy Macphail. Thanks to the book festival organisers for providing us with such great events.
Coming up this term is a visit from Kilmartin Museum to discover all things Viking, and a Gaelic awareness day on the 30th September. Keep in touch to find out what the pupils think.