Web links and task information will be added here:

We hope that you find the information in this section helpful but, if after reading it, you are still unsure about anything please do not hesitate to contact any member of staff or the school office. If you ever want to arrange an appointment, it is best to contact the school office by telephone.

Parents who have had children at nursery will already be familiar with the school. The staff in Fisherton Primary work towards creating a happy, relaxed learning atmosphere where your child will be encouraged to participate in the life of the school, to work hard and to strive to achieve the best possible for himself/herself.

We learned  new strategies for adding: 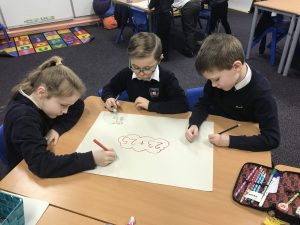 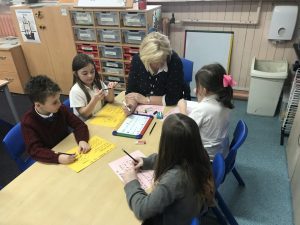 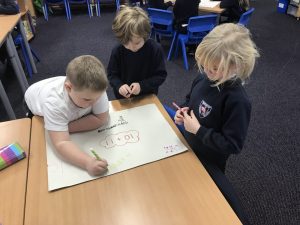 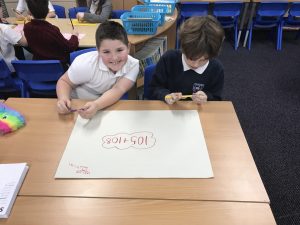 We wrote diamante poems about Scotland. 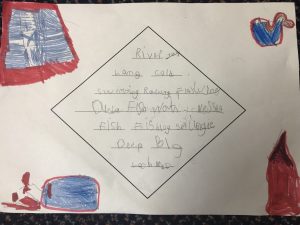 In Literacy, we learned about plurals.

We made our own Scot’s Dictionaries with Scottish words we have learned,

We learned where different cities are in Scotland. We glued the city names on to a map.

We redrafted our Friendship Recipes to make a nice display.

I have tried really hard to improve my handwriting because that’s my New Year’s resolution.

My group got a more challenging book for reading.

My handwriting has improved.

I learned to use a 100 square and got harder questions in Numeracy.

IIn maths we have been learning about shape and symmetry. 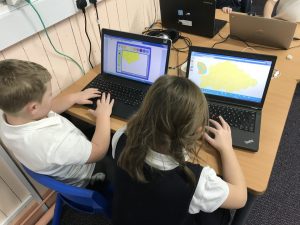 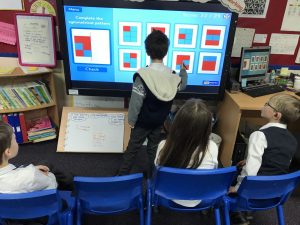 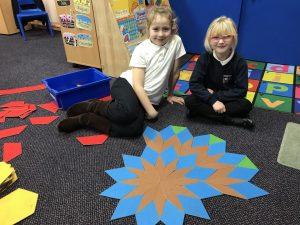 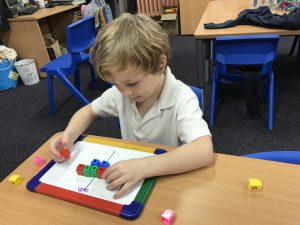 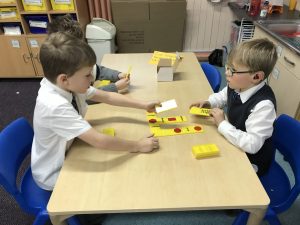 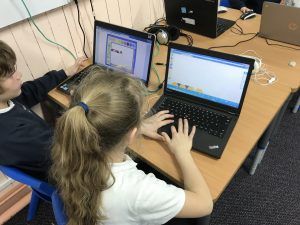 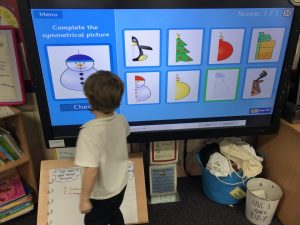 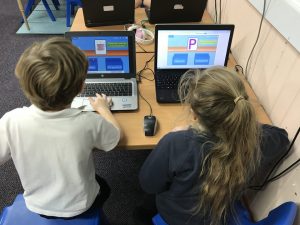 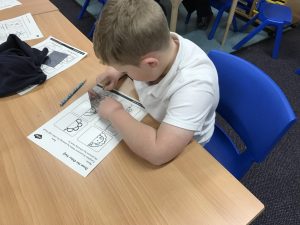 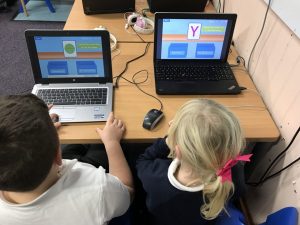 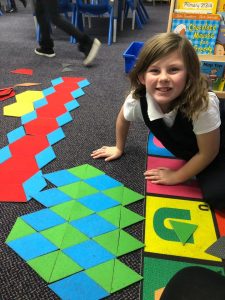 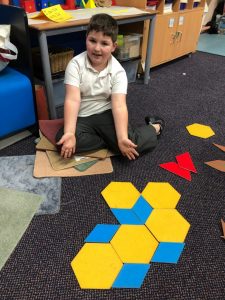 I can make tiling patterns using the laptop.

I enjoyed using the floor shapes to make tiling patterns.

On Friday Jacqui invited us in to the dinner hall to teach us about food safety and hygiene.

We learned that hot food has to be 75 degrees or above to be safe to eat. We got to use the thermometer to check the food’s temperature! 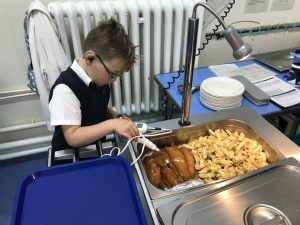 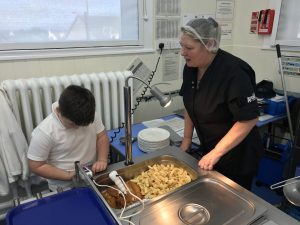 We also learned that soup shouldn’t be hotter than 67 degrees and that chilled food should be 8 degrees or less.

Jacqui showed us the proper way to wash our hands to make sure they are really clean! 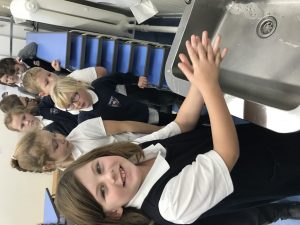 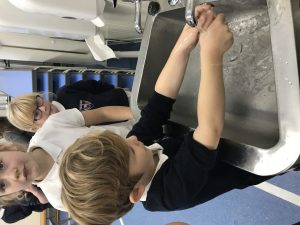 We are looking forward to using what we learned on our Halloween Activity Day!!

Our current learning theme is ‘Entertainment’.

We had entertainers visiting our school and talking to us about their work in the entertainment industry.  We heard about how you sometimes face setbacks but you have to be determined  if you want something to work.  They also talked to us about perseverance when you are trying to learn a new skill.  We heard about their different jobs as actors in theatres, as writers creating shows and as directors helping other actors perform. 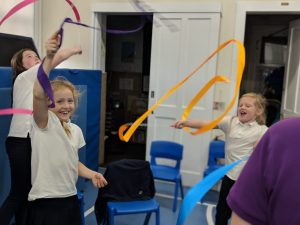 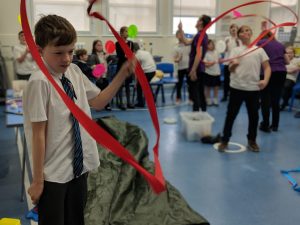 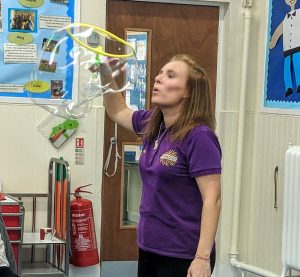 We enjoyed and learned many things….

I enjoyed doing the spinning plates because it was funny trying to start it off and I enjoyed the juggling because it was hard.  I learned that It doesn’t work the first time so you shouldn’t give up.

I enjoyed blowing bubbles inside other bubbles.  I learned that you can get gigantic bubble blowers.

I learned that you can blow bubble into bubble once they’re formed. I loved the bubble volcano because I thought it was interesting how they floated out.

I enjoyed the juggling with the harder balls.  I learned that blowing into the bubbles is really not that hard.

I enjoyed playing with the ribbons because the ribbons were all different colours and it made me feel like it was a rainbow.  I learned that you don’t have to go to university to be an entertainer but you can if you want to.

I enjoyed getting the bubble hat because it popped when the bubbles fell on it.  I learned that bubbles can never be squares unless you trap them.

We had a fantastic day with Mr Allen in the Design & Technologies department at Carrick Academy.  We couldn’t have been made feel more welcome and were assisted by 2 awesome seniors, who came in to help during their study leave.

After a tour of the department, the pupils got to see the 3D printer in action.  It printed us a 3D version of our school badge to take back to show the wee class.  They then followed a step by step lesson on CAD to design a keyring.  The design information was sent to the laser cutter and each pupil got to take home their personalised keyring.  The pupils were very impressed by the fact that Mr Allen could control their computer from his!  They heard how the A3 printer can make large print jobs and we got a fantastic banner to take back to school.  The final task was a Scalextrics tournament……Martha was the winner!

Throughout the day we linked design tasks to maths and gave a real context to measure, shape and scale.  We also made links between the skills that are developed in the department and the types of jobs that would use these skills.

P5-7 pupils really enjoyed this learning day; they looked mesmerised by all the equipment and machines. Carrick Academy and the teachers were no where near as scary as some of the pupils thought they might be! They can’t wait to get to go back one day.

What the pupils said:

We had a competitive class today! We used newspaper and K’Nex to build the strongest bridge and the tallest tower.  Who do you think won??

We also made accounts on My World of Work and will use this over the coming years to help us plan our career paths.  One of the games told us what animal our personality was most like;  MP was delighted to find out she was a teddy bear! CG was very pleased with his falcon animal personality. 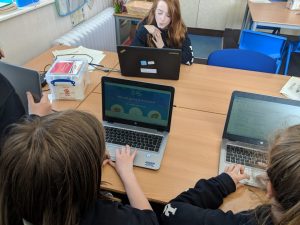 Thanks to Professor Kate from @UniWestScotland for coming to @FishertonPS for our #STEM week #science day and teaching us all about microbes. We were also fascinated to hear about all the different science based jobs we could have one day! @DYWAyrshire pic.twitter.com/m5DIOevDt3

What a fantastic weekend we had at the first EVER Dolphin House camp!

Our experience was loads of fun but also had a serious side.  Throughout the event we reflected on the life of refugees in a different type of camp! We had 2 activities that were very refugee focused.  They were called FEAR and ESCAPE.  If you want to know more then please ask us!