Staff at Greenfaulds had prepared a range of interesting lessons for the P7s. The children reported that they thoroughly enjoyed their experiences in the various subject areas. The Primary 7 pupils were fantastic during the visit. We wish them well in their final weeks of primary school and look forward to seeing them when they return in August as pupils of Greenfaulds High School.

Last week the Greenfaulds High Performing Arts faculty went on their annual ‘Grand Tour’ of our associated primaries. This ever-popular event was highly anticipated by both the primary school and high school pupils and on Monday morning, no fewer than 90 performers and a whole array of instruments, from xylophones, to accordions and even a flat pack drum-kit were loaded onto 4 buses to begin 3 days’ worth of concerts at Baird Memorial, Woodlands, Eastfield, Condorrat, Westfield and Ravenswood Primaries. This year’s tour featured FOUR bands – the Junior Band, Traditional Band, Jazz Band and Senior Band – plus the cast of our show ‘Hairspray’.

The Junior Band, featuring woodwind, brass and percussion players from S1 – S3, kicked of the first concert in style with the song ‘Best Day of Our Lives’ which got the primary kids singing along from the outset and let the P6 and P7s see the types of instruments that they themselves could begin playing next year. The traditional band followed with a quieter acoustic set, of which ‘The Star of County Down’ was really popular. The show cast then gave primary pupils a sneak preview of some of the songs from this year’s show ‘Hairspray’, which included some incredible soloists (and stand-in soloists), upbeat singing and energetic dancing – get your tickets now for the shows on Wed 21st, Thu 22nd and Fri 23rd, available from the school office, before they sell out!

The Senior Band showed off their new percussion section and even got the primary pupils to help play the tubular bells in their version of Bruno Mars’ – ‘Marry You’! Finally the Jazz Band ended each concert in style with the big singalong numbers ‘The Bare Necessities’ and ‘We Are Family’. With audience members giving comments such as “This was the best concert yet” and “This was the best example of a transition event I’ve seen”, we think it’s safe to say the tour was a resounding success and we WILL be back next year! 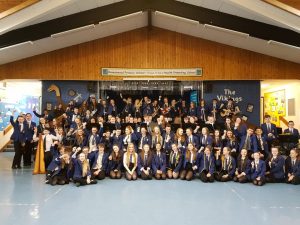 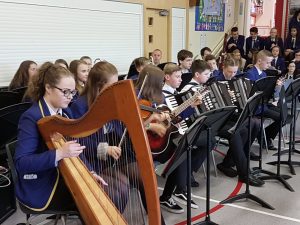 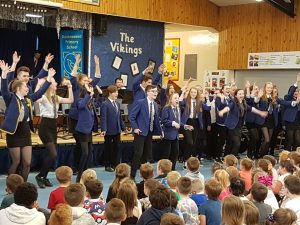 This year North Lanarkshire Council hosted the very first Modern Languages Awards Ceremony for 1+2 learning in the Broad General Education.  The faculty of Modern Languages and Gaelic at Greenfaulds High School submitted nominations for each category. 5 of our pupils were successful in reaching the final stages within their categories and we were invited to attend the awards ceremony on Tuesday 23rd May at Airdrie Stadium. We are delighted that all 5 pupils won the award for their category, as well as our Spanish language assistant Andrés. This is a result of hard work, enthusiasm and dedication on their part. We are very proud of them! Well done.

Most Improved Language Learner of the Year S3 – Luke McAllen

Greenfaulds High School is taking part the Wildlife Trusts 30 Days Wild- the UK’s first ever month long nature challenge. The idea behind this challenge is to do something wild in the outdoors each day for the month of June. You can climb a hill, take a photo or plant a wild garden.

As our school breaks up near the end of the month the competition in GHS will run from May 25th to June 23rd. Pupils will be issued with a checklist of tasks to complete within the 30 days; the first three S1 pupils to complete all of the tasks (with a photo as evidence) will take home prizes. If no pupil has completed all tasks by Friday June 23rd, then the pupil with the most challenges completed will be announced as the winner on Monday June 26th.

Pupils should document their adventures with a photo as evidence – or they can tweet @GHSGeography with their name, task number and the #GHSwildchallenge

GHS Modern Languages department is delighted to, once again, have officially the best languages students in Scotland – or at least the most competitive! Once again our brilliant students have topped Scotland’s rankings in this year’s Language Perfect World Championships. The LPWC, held from 15th – 25th May, is the world’s largest online language-learning competition, with students from all over the world clocking up hundreds of thousands of hours online, answering over 200 million questions over the ten-day period.

This was the 5th year that Greenfaulds has participated and we certainly did it in style, spending a combined 307 hours online, answering a whopping 300 758 questions and earning an admirable 53 certificates in the process! Sam James, 2PA, was not only the top student in the school with 10 012 points, but also top in Scotland and 25th in the whole of the UK! Here is the full Leader Board of winners:

These pupils will receive a prize from the school to reward them for their efforts. The rest of the pupils who competed also have a chance at prizes: for every 100 points earned, a pupil’s name will be entered once into the departmental prize draw, to be drawn imminently, and winners will each receive a £10 voucher.

Overall the competition was a complete success, thoroughly enjoyed by all who took advantage of the chance to use the fantastic Language Perfect software to improve their language skills. A lot of positive feedback was received – “Learning Spanish is so easy on here” (Caitlin Curthoys, S1); “This is a fun programme where you can learn but also compete to see who learns the most. I would like to thank my ML teachers that brought this up and giving me a chance,” (Robbie Neill, S1). We hope that next year’s assault on the World Championships can be even bigger and better!

For more info about the competition or the software, contact Miss Deans or visit http://www.languageperfect.com/worldchamps/SiteShell.html

Sean visited the school from 10.30-11.30 in order to participate in a challenge. His challenge was to learn how to deliver a weather forecast in Gaelic. He was taught how to do this by one of our pupils, Eilidh Simpson.

We received sponsorship from our partners Morrison Construction, who printed a Gaelic phrase book which we produced. A large number of copies of the phrase book were printed and are still available from the school.

The event, attended by pupils from Condorrat Primary School as well as S1-3 pupils from Greenfaulds High School was filmed for STV children’s appeal programming.

Sean was a great sport as he learned a whole host of new phrases in Gaelic. His pronunciation was excellent and his enthusiasm for the challenge was clear for all to see! 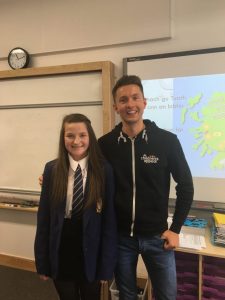 2017 is the year of History, Heritage and Archaeology and the Art and Design Department at GHS have been successful with a heritage lottery fund bid for Stories, Stones and Bones sharing heritage funding. The amount of the bid is £10,000.

The Art & Design project is called ‘A Sense of Place: The Roman Presence in Cumbernauld’ and the key local heritage sites are Bar Hill Roman Fort and the Antonine Wall. The Art & Design department are looking forward to taking pupils on trips to see the Roman fort and Antonine Wall, as well as Roman artefacts in collections at the Hunterian Museum and the National Museum of Scotland. A main part of the project will involve S1-S3 pupils creating a series of large mosaics with the Scottish artist Alan Potter (for display at GHS). Pupils will also be working with Scottish artist Kate Leiper to create illustrations for an illustrated brochure about the heritage sites and the Roman presence in Cumbernauld. The grant will also provide materials for Roman-themed printmaking, illustration and pottery activities for hundreds of S1-S6 pupils at GHS, and staff and pupils at GHS are also looking forward to creating some artworks with pupils at Redburn School. Everyone is excited about showcasing the project at the local Cumbernauld Museum and in special exhibitions at GHS throughout the next year, engaging the local community with their heritage. 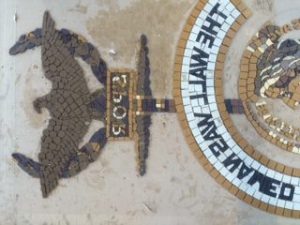 Dates for the Dairy